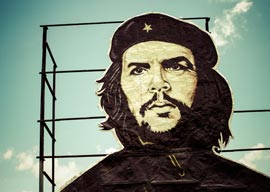 We can see this in the liberal demigod Che Guevera. His insatiable lust for power was cloaked as a need for justice, but it’s arguably just a case of a mentally ill child trying to impose order on a world he felt was spinning out of control. Che grew up in a household where his emotionally absent father would openly flaunt infidelity. Ernesto Guevara Lynch was a loser who blew his wife’s fortune on himself and young girls. I”ve noticed a pattern with liberals and fathers who were negligent and financially irresponsible. So much of their belief system seems to come from revenge. This is why they attack white men for looking at someone funny but turn a blind eye to a child prostitution ring in Rotherham. This is also why feminists won”t shut up about the “white male patriarchy” (“patriarch” meaning “father”) but have nothing to say about the shocking difference between black-on-white rape and white-on-black rape. Che is no different. He took his pain and turned it into a crusade against the world. This is why liberals put him on a T-shirt. They don”t like him because he freed Cuba or forced socialism down its throat. They like him because he personifies the cry-bully.

These shrill fascists with daddy issues don”t care about the issues they”re yelling about. They just want to yell. The reason they”re doing it is so you”ll slap them and say, “Get ahold of yourself, you fool.” The problem is, we”re not doing that. We”re capitulating and apologizing. This doesn”t solve the problem. It exacerbates it. Their lust for power is insatiable. After Cuba, Che continued his crusade to the Congo and Bolivia, where he finally got his slap in the face. I asked Amier how often he comes across these Che types and he said he sees far more of their victims.

“Hate and rage are natural emotions,” he says while comparing psychoanalysis to punk rock. “To run from them is unhealthy. There are some who are so scared of hate, so petrified of being politically incorrect, they are literally making themselves sick. These people have a lot of difficulty tolerating their own hostility, their own hate. The straitjacket of political correctness takes its toll on maturation and happiness. Once real, emotional, raw hatred is tolerated and expressed, patients begin to solve the specific problems they”re having and begin to equip themselves with the tools to fix their lives.”

I don”t care about the cry-bullies. They”re a slap away from getting out of my face. I care about the millions of people being corralled into pacifism. We need to take a page out of the Bolivian handbook and start doing the job their absent fathers failed to do. Let’s stop lamenting and get slapping.