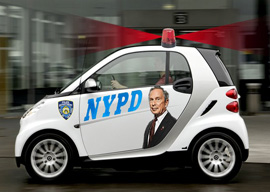 After leaving dinner with my in-laws here in Brooklyn on Monday, I saw two men standing on the curb looking very righteous. One was Asian and the other was white, which in this area usually signifies they”re yuppie gentrifiers. Sitting on the sidewalk next to them was a Hispanic-looking twenty-something who kept bending and unbending his knees. As I passed this scene with my wife’s dad, a cop car pulled up and the two yuppies proudly motioned where they should park. The whole scene was so irritating, I insisted we leave.

A block later, a gigantic fire truck rushed past us toward the scene with sirens blaring, then another cop car, then an FDNY supervisor truck, and finally an ambulance. I”m guessing the bill for the call was about $10,000. The ambulance alone could cost as high as half that.

I later found out what happened. Apparently, the Hispanic sideswiped the car on his bike. He went rolling over the hood Dukes of Hazzard-style but got up and was fine. The driver got out of his car to make sure he was OK. Both were about to get on with their lives when a group of concerned citizens swept in and took control. They prevented both parties from leaving and insisted everyone wait for the cops. (One of them even held the driver’s arm and said, “You”re staying right here, dude.”) Our two cop-calling heroes turned a minor wipeout”the kind you had 1,000 times when you were a kid”and turned it into a huge tax-bill sundae with a potential lawsuit cherry on top. This is the new New York.

I”m not saying I miss the days when being a New Yorker meant being mugged at least once and the cops were more concerned with getting laid than with catching rapists, but the pendulum has swung in the other direction so fast, it’s giving us whiplash. We call the authorities to handle not only all of our problems but everyone else’s, too. We are “turning citizens into clients of the state.” We”re enabling the “childlike dependence“ Milton Friedman warned of thirty years ago. Philadelphia Mayor Frank Rizzo once said a conservative is a liberal who got mugged the night before. A modern New Yorker has become a police-hating hippie who leaps into the cops” arms the millisecond he detects conflict.

“We call the authorities to handle not only all of our problems but everyone else’s, too.”

In the West Village last week, spa worker Meng Dong scooped a parking space from celebrity jeweler Dawnelle Joie Yager. Miss Dawnelle was so mad at the tenacious turd she allegedly punched him in the chest and bonked him with her umbrella. PO-LEEEECE! Shortly after, the supermodel-looking debutante was charged with third-degree assault, attempted assault, and harassment. “The police thought it was so funny,” Yager is quoted as saying, “That they pulled up the Seinfeld episode [“The Parking Space”] on YouTube.”

With every tragedy, whether real or overblown, authorities are laughing all the way to the bank. In a city where we are so overstaffed with firemen and cops that their pensions are about to bankrupt us, they need all the calls they can get. Every siren that blares down the street screams, “See? You still need us!”

If you were anywhere but New York and you saw a drunk stumble to the ground, you”d roll your eyes and say, “Oh, for chrissakes.” That’s what I mumbled on St. Mark’s Place last year where some pathetic boozer hit the pavement so hard, he gave himself skinned knees and a bloody nose. Like the kid who rolled over the car in Brooklyn, it was instantly clear he had the kind of accident that usually requires a Band-Aid and maybe a hug from mom. But the NYU students who witnessed the fall immediately yelled at him to stay down as they yanked out their iPhones to call 911. “He doesn”t want to go to the hospital,” I told them. “He’s just a drunk who fell down because he’s so drunk.” As I was saying this, the bloodied but unbowed alcoholic stood up and mumbled, “He’s right” before adding, “I”m a piece of shit.” Then he wobbled off to find more booze. The kids with the phones no longer felt like heroes. True hero that I am, I saved the taxpayers a big pile of money.

Only the most extreme anarchists believe in a society without police. When OWS experienced rape and assault, protestors reportedly discouraged people from calling the cops. Unfortunately, they were too bourgeois to dole out the punishments themselves, so we were left with the worst possible definition of the word anarchy.

But that strange world was an exception. The other 99% of New Yorkers are so eager to comply with Bloomberg’s employees, dialing 911 has become pure instinct. It’s like when you catch yourself typing out 12 x 100 on a calculator. What started out as something you”d only use when you couldn”t handle it yourself now solves even the simplest of problems. Today’s New Yorkers walk around like Chris Makepeace in My Bodyguard floating their finger above their iPhone’s “emergency call” button.