Diary of an Expatriate Ice Person 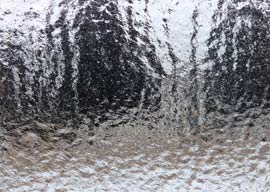 It’s a good thing I”m going senile, because I can”t remember a winter worse than this one. I guess I”ve been through harsher winters back in the mid-1960s up North when I dimly remember snow shoveled higher than my head, but what I know for certain is that I did not move to Georgia for this sort of foolishness. In two of the past three weeks, winter storms have crippled the Atlanta metro area, and I’ve been a grumpy hermit whose heart is entombed in an ice shell. Last Wednesday, this is what it looked like outside my window. Begone, ye cruel gods of winter!

I feel it’s healthy for a man to acknowledge his weaknesses, and one of my biggies is cold weather. I believe that if there’s a hell, it’s cold. My mood improves or declines in direct correlation with spikes and dips in the mercury. As faggy as it sounds to admit, a part of me dies inside every year with the first chilly breeze of autumn.

Sure, it gets darker in the winter, but it is not sunlight deprivation that makes me wish I could crawl inside a giant dinosaur uterus and hibernate until springtime. I’d rather it be 90 degrees and completely overcast than 30 and sunny. Hell, I’d rather it be 40 degrees and overcast than 30 and sunny. Once it dips below 40, I’m screaming like a woman. I lived in Oregon for 11 years and although the sky there is a dead, ominous tombstone of clouds from October to May, it never gets nearly as cold as it did in the Philadelphia of my youth”nor as it does here in the highly elevated Atlanta metro area, nestled as we are near the Appalachian foothills.

“Proof of European intelligence is the fact that white people got the hell out of Europe and began colonizing warmer climates.”

This winter”the one that introduced Americans to the concept of a “polar vortex””has seen record snowfalls and a “tremendous amount” of seasonal affective disorder, although I’m curious how one measures the latter. This so-called “disorder” is said to be elevated in Nordic countries and among the Irish. Except for the less than one-thousandth of my DNA that is hypothetically Ashkenazi and the other less than one-thousandth that is possibly South Asian, I’m pretty much a full-blown Northern European snow cone, which may or may not account for my pronounced midwinter malaise.

My continental ancestry renders me a member of what Professor Leonard Jeffries would categorize as “Ice People.” According to Jeffries, Ice People are the blue-eyed devils of the frozen North whose cruel, violent, and selfish nature stands in shameful contrast to that of the dark-hued “Sun People,” who hail from warmer climes and are therefore warmer in spirit and more community-oriented.

Jeffries sets up the dichotomy thusly:

Our thesis is that the sun people, the African family of warm communal hope, meets an antithesis, the vision of ice people, Europeans, colonizers, oppressors, the cold, rigid element in world history.