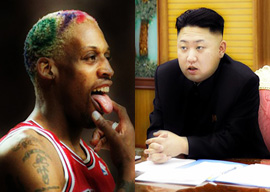 Outrage and disgust, yes. Surprise, not so much. Dimwitted celebs rubbing elbows with fascists, dictators, totalitarians, and sundry president-for-life types has been commonplace for so long in our culture that hardly anyone is shocked by it. There are some obvious points of common ground for dictators and celebrities, including superhuman levels of vanity, a marked indifference to reality, and the uncanny ability to feel completely at ease in the presence of obvious sycophants.

”…maybe Justin Bieber will perform at a private banquet for Robert Mugabe.”

In Rodman and Kim Jong-un’s case, the bonding was apparently spurred by a mutual love for basketball, a game whose appeal to a diminutive, pudgy Asian man is lost on me.

Well-intentioned or not, the much-publicized visit at least gave us the memorable sight of this particularly odd couple being photographed together”the lanky, multiply pierced Rodman sitting next to the hopelessly un-photogenic Kim, who resembles a giant matzo ball stuffed into a Mao jacket.

But public outrage will quickly slide into indifference, only to be summoned again when, who knows, maybe Justin Bieber will perform at a private banquet for Robert Mugabe. Rodman is not the first clueless celeb to fall for the allure of a power-mad despot. He likely won”t be the last. Other Mussolini types who have enjoyed cordial relations with singers, dancers, and actors have included:

“¢ Deceased Libyan strongman, Lockerbie bombing financier, and metrosexual fashion icon Colonel Muammar Gaddafi”as well a few of his several dozen sons, apparently”shelled out exorbitant sums to have private musical performances from the willing and eager likes of Nelly Furtado, BeyoncÃ©, and Mariah Carey, the last of whom claimed quite convincingly that she was “naÃ¯ve and unaware” she had been performing for a dictator.