Did Africans Sell Africans Into Slavery? Let’s Ask Some Africans 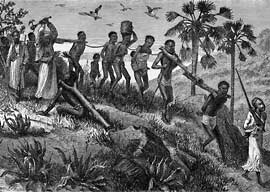 If there is a historical weapon more powerful and decisive than guns, it is certainly guilt. Those who seek to conquer will wield the primitive biblical notion of collective guilt as a bludgeon to dampen a rival group’s spirit and their willingness to resist. Guilt is injected like a fatal virus into entire populations to demoralize and weaken them. And at least as far as whites in the West are concerned, it is working like a charm.

Without so much as asking a single question, many modern whites have gullibly swallowed a skewed and incomplete historical narrative that depicts them as history’s sole villains and the nonwhite world as innocent, suffering lambs.

Alas, despite the cheering warmth such simplicities afford to simple minds, life is never that simple, and as any honest student of history knows, there is no such thing as “good guys””there are only bad guys who won and bad guys who lost.

Whenever I note that when it comes to the emotionally hypersensitive topic of slavery, there is more than enough historical guilt to go around and that slavery’s history cannot neatly be boxed into binary struggles of good versus evil or black versus white, I am invariably accused of trying to alleviate or deny the guilt that we are ceaselessly lectured whites should constantly be torturing ourselves with.

“If there is a historical weapon more powerful and decisive than guns, it is certainly guilt.”

If one dares to point out that Africans were vastly complicit in the African slave trade, one is accused of trying to “deny” white guilt or to “absolve” whites of guilt, or of trying to argue that “two wrongs make a right.”

No, dummies. Two wrongs make two wrongs. But the question is: Why do you focus only on one wrong? It would seem that in all cases, the ones who are truly trying to “deny” guilt or “absolve” themselves of it are the ones who insist everyone focus merely on one wrong rather than all of them. Humanity, regardless of color, will never suffer a shortage of guilt.

Many black apologists and their white enablers will outright deny that Africans sold Africans into slavery. The always interesting Nation of Islam argues that these treacherous go-betweens weren’t truly “African” anyway”they were instead Portuguese Jewish half-breeds known as lancados who’d deliberately interbred with indigenous Africans in order to swindle and kidnap them before handing them over to Jewish slave traders who’d shlep them to the Americas.

To many others for whom the overwhelming evidence of African collaboration in the slave trade becomes impossible to deny, they’ll leap through flaming poodle hoops trying to make excuses. They’ll allege that African slavery was more benign than all other forms…or that Africans who sold other Africans to Islamic and European slavers had no idea how brutally the victims would be treated…or that they didn’t consider one another “black” but rather enemies from warring tribes, as if that makes it any better ethically…or that it was only a handful of African Judases and Uncle Toms who sold their continental kin into New World bondage and was not in any way an established, officially mandated, and integral part of several sub-Saharan economies.

Nearly all modern historians agree that the scenario depicted by Alex Haley in Roots“that of white raiders penetrating the African interior to rout African villages for slaves”is fraudulent. Instead, European slave traders nearly always bought slaves from African vendors at coastal markets. We hear much about the brutal “Middle Passage” across the Atlantic Ocean, but almost never about the estimated 10 million or so indigenous Africans who perished while being marched to the sea in chains and yokes by their African captors.

We don’t hear that according to Boston University’s Linda Heywood and John Thornton, about 90% of Africans transported to the New World had initially been enslaved by other Africans. We don’t hear about Tippu Tip, who was once a world-famous black slave trader in Zanzibar. And we certainly don’t hear much about how Barack Obama”who has no ancestral ties to African slaves in America”is descended from the Luo peoples, who routinely captured other Africans in war and sold them into slavery.

But when the Transatlantic Slave Trade was still active, what did African blacks and their American descendants have to say? Glad you asked:

“…I must own, to the shame of my own countrymen, that I was first kidnapped and betrayed by some of my own complexion, who were the first cause of my exile and slavery…If there were no buyers there would be no sellers.”
“African abolitionist Ottobah Cugoano (1757-1791)

“The savage chiefs of the western coasts of Africa, who for ages have been accustomed to selling their captives into bondage and pocketing the ready cash for them, will not more readily accept our moral and economical ideas than the slave traders of Maryland and Virginia….We are, therefore, less inclined to go to Africa to work against the slave trade than to stay here to work against it.”
“Frederick Douglass

And here’s what several prominent modern African leaders have to say about the subject:

“African chiefs were the ones waging war on each other and capturing their own people and selling them. If anyone should apologize, it should be the African chiefs. We still have those traitors here even today.”
“Ugandan President Yoweri Museveni, 1998