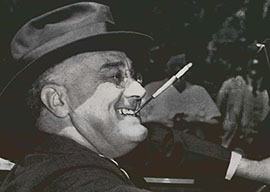 As a history buff, I have tried to come to terms with the “surprise” Japanese attack at Pearl Harbor. That lugubrious anniversary”December 7th”is fast approaching. For its impact upon American history, Pearl Harbor ranks alongside Fort Sumter’s bombardment on April 12, 1861. My view is that the Civil War’s outbreak marked the U.S. Constitution’s termination, ending the American Republic of 1789. Pearl Harbor ushered in the second irreversible downturn: the collapse of the reconstituted American Republic established in the Civil War’s aftermath.

Pearl Harbor made possible America’s transmogrification, under Franklin Roosevelt’s dishonest leadership, from a republic into a global empire. Nothing remotely like that had been contemplated by Jefferson, Washington, Madison, or John Adams. Journalist Garet Garrett said FDR had created “Ex America.” We are living in a postscript era. In a sense, thanks to Fort Sumter and Pearl Harbor, America is at least twice removed from the Founding Fathers” ideals and constraints. We are now at sea, making it up as we go along.

My favorite book on Pearl Harbor remains the first one I read: Final Secret of Pearl Harbor by Rear Admiral Robert Theobald (1954). He was there during the attack. He was the Commander of Destroyer Flotilla One in the Pacific Fleet under Admiral Husband Kimmel, Commander-in-Chief. In a foreword to the book, Kimmel states:

…Theobald’s studies have caused him to conclude that we were unready at Pearl Harbor because President Roosevelt’s plans required that no word be sent to alert the Fleet in Hawaii.

Once you read Theobald’s book, you realize what a masterpiece of understatement that is. Theobald succeeded in putting all the circumstantial pieces of evidence together, and they fit.

Kimmel’s foreword is followed by a second one, written by famous Fleet Admiral William F. Halsey:

At that time, I was one of the three senior commanders of the Pacific Fleet, serving under Admiral Kimmel. I am sure he kept me informed of all the intelligence he possessed. Certainly I did not know then of any of the pertinent “Magic Messages”….Had we known of Japan’s minute and continued interest in the exact location and movement of our ships in Pearl Harbor, as indicated in the “Magic Messages,” it is only logical that we would have concentrated our thought on meeting the practical certainty of an attack on Pearl Harbor.

The “Magic” (diplomatic) Japanese intercepts do not explain why, but they are a window. They provide us with strong circumstantial evidence that Roosevelt and his close associates were fully aware of their actions” consequences.

But in Pearl Harbor’s aftermath, FDR scapegoated Kimmel, along with U.S. Army Lt. General Walter Short, for the successful Japanese attack. Kimmel asked for a court-martial to defend himself, but it never happened. His 1955 book Admiral Kimmel’s Story made his case in public, free of war hysteria and understatement:

The attack on the morning of December 7, 1941, was a fiery answer to Secretary of State Cordell Hull’s ultimatum to Japan of November 26th, which in Hull’s own words to Secretary of War Stimson had ‘broken the whole matter off….I have washed my hands of it and it is now in the hands of you and Knox”the Army and the Navy.’

Needless to say, neither General Short nor I had any clear perception of the fact that the Roosevelt Administration was pursuing a course of action that made war with Japan inevitable…. The information received during the ten days preceding the attack clearly pointed to the fleet at Pearl Harbor as the Japanese objective, yet not one word of warning and none of this information was given to the Hawaiian commanders….This lack of action on the part of both the War and Navy Departments must have been in accordance with high political direction….

There have been a number of books published since 1955 that utilize new information and insights to buttress the Theobald/Kimmel thesis. All signs point in one direction”to FDR and his inner circle.

“Pearl Harbor made possible America’s transmogrification, under Franklin Roosevelt’s dishonest leadership, from a republic into a global empire.”

In 2007’s The Pearl Harbor Myth: Rethinking the Unthinkable, psychotherapist George Victor cites the actions of Presidents James Polk, Abe Lincoln, William McKinley, and Woodrow Wilson, all of whom used subterfuge and propaganda to launch America into war. Still, no president before Roosevelt did it in so spectacular a fashion.

Polk invaded Mexico in 1846 to grab California and Texas and everything in between. Lincoln waged war upon the Southern states in 1861 to prevent the South from withdrawing peacefully from the Union. McKinley provoked Spain in 1898 so he could grab Cuba, Hawaii, and the Philippines. Wilson administered the coup de grÃ¢ce in 1917 to a war-weary Germany to rescue a beaten John Bull. But none of these escapades quite reaches the treachery of Roosevelt and his associates in luring the Japanese into attacking Pearl Harbor. There’s also the colossal irony of Roosevelt proclaiming the orchestrated deed “a day of infamy” to a joint session of Congress the very next day.