Did Heavy Metal Brain Damage Cause the 1960s? 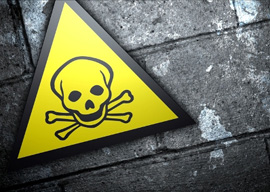 As part of my continuing series on the causes of the 60s, let’s consider Kevin Drum’s revival (”America’s Real Criminal Element: Lead”) in Mother Jones magazine of the recurrent theory that lead poisoning leads to the decline of civilization.

When I was young, it was popular to blame the decline and fall of the Roman Empire on the ancients’ fondness for this soft and versatile metal. (Have you ever noticed that nobody is much interested in how the Roman Empire managed to last so long?)

That exposure to this heavy metal can be dangerous to humans has been recognized since the days of Hippocrates and Pliny the Elder. But lead was so useful in so many ways that more than a few American municipalities proudly named themselves after their lucrative lead resources. Leadville, Colorado is America’s highest elevated incorporated city. There are several Galenas, one of which is a tourist town in Illinois. There’s a Smelterville, which sounds like a city made up for The Simpsons but is actually a real place in Idaho.

Ironically, Drum stands the dominant narrative about the 60s on its head. Instead of the 60s representing enlightened emancipation from the shackles of 50s conformist culture, Drum finds the 60s, with their rising rates of crime and illegitimate births, to be the result of brain damage.

“If there are connections between lead poisoning and crime, there’s gold to be made in unraveling them.”

Known side effects of lead poisoning include lower IQ and reduced impulse control, which are in turn associated with poor decision-making, such as becoming a criminal or a single mom.

The lead-crime theory is, in essence, uncomplicated: Lead was added to gasoline between the World Wars, and a generation or so later, Central Park was full of muggers. Spiro Agnew couldn’t have come up with a funnier diagnosis of the 60s than what Drum has talked an increasing number of liberals into believing.

The theory is almost as malleable as the metal. If crime is high among blacks in a car-dependent Sunbelt city, it’s because particles from leaded gasoline are still in the soil. But if crime is high in an old industrial city where poor blacks mostly took public transportation, it could be due to lead paint.

Drum and Nevin attempt to blame lead poisoning for much of the difference between black and white crime rates. Nevin, for example, notes that the notoriously violent Robert Taylor Homes were built near Chicago’s Dan Ryan Expressway. (Ironically, one reason why mid-century liberals in Chicago had favored the construction of gleaming new housing projects was because of the tragic deaths of tenement toddlers who ate chips of lead paint they had peeled off the decaying walls.)

Yet one of the more obvious differences between Chicago’s black and white areas is the heavier traffic in the expensive, safe zones. People who can afford cars tend to move away from black slums, leaving them bleak. In the Chicago area, race and class palpably determine the homicide rate. For example, compare the next-door neighbors Oak Park and Austin west of The Loop. The Eisenhower Expressway runs through Oak Park, but not through Austin. Yet the homicide rate is several dozen times worse in Austin.

Drum, who lives in Irvine, at least should be familiar with Southern California, where South-Central is fairly light in traffic compared to the jammed freeway interchanges of upscale West LA and Sherman Oaks.

And across the country, the densest neighborhoods are typically the various Chinatowns, which suffer little street crime and enjoy high math scores.