Did Putin Order the Salisbury Hit? 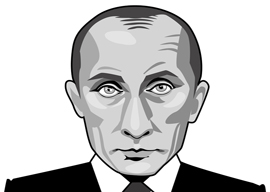 Britain has yet to identify the assassin who tried to murder the double agent Sergei Skripal and his daughter, Yulia, in Salisbury, England.

But Foreign Secretary Boris Johnson knows who ordered the hit.

“We think it overwhelmingly likely that it was (Russian President Vladimir Putin’s) decision to direct the use of a nerve agent on the streets of the U.K.”

“Unforgivable,” says Putin spokesman Dmitry Peskov of the charge, which also defies “common sense.” On Sunday, Putin echoed Peskov: “It is just sheer nonsense, complete rubbish, to think that anyone in Russia could do anything like that in the run-up to the presidential election and the World Cup. … It’s simply unthinkable.”

Putin repeated Russia’s offer to assist in the investigation.

But Johnson is not backing down; he is doubling down.

“We gave the Russians every opportunity to come up with an alternative hypothesis … and they haven’t,” said Johnson. “We actually have evidence … that Russia has not only been investigating the delivery of nerve agents for the purposes of assassination but has also been creating and stockpiling Novichok,” the poison used in Salisbury.

Why Russia is the prime suspect is understandable. Novichok was created by Russia’s military decades ago, and Skripal, a former Russian intel officer, betrayed Russian spies to MI6.

But what is missing here is the Kremlin’s motive for the crime.

“Only a moron could not have known what the political ramifications of such an atrocity as this would be on U.S.-British-Russian relations.”

Skripal was convicted of betraying Russian spies in 2006. He spent four years in prison and was exchanged in 2010 for Russian spies in the U.S. If Putin wanted Skripal dead as an example to all potential traitors, why didn’t he execute him while he was in Kremlin custody?

Why wait until eight years after Skripal had been sent to England? And how would this murder on British soil advance any Russian interest?

Putin is no fool. A veteran intelligence agent, he knows that no rival intel agency such as the CIA or MI6 would trade spies with Russia if the Kremlin were to go about killing them after they have been traded.

Certainly, in this case, not Russia, not the Kremlin, not Putin.

All have taken a ceaseless beating in world opinion and Western media since the Skripals were found comatose, near death, on that bench outside a mall in Salisbury.

Predictably, Britain’s reaction has been rage, revulsion and retaliation. Twenty-three Russian diplomats, intelligence agents in their London embassy, have been expelled. The Brits have been treating Putin as a pariah and depicting Russia as outside the circle of civilized nations.

Russia is “ripping up the international rulebook,” roared Defense Secretary Gavin Williamson. Asked how Moscow might respond to the expulsions, Williamson retorted: Russia should “go away and shut up.”

Putin sympathizers, including Labour Party leader Jeremy Corbyn, have been silenced or savaged as appeasers for resisting the rush to judgment.

The Americans naturally came down on the side of their oldest ally, with President Donald Trump imposing new sanctions.

We are daily admonished that Putin tried to tip the 2016 election to Trump. But if so, why would Putin order a public assassination that would almost compel Trump to postpone his efforts at a rapprochement?