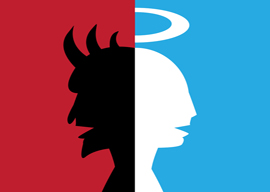 At its “Never Is Now” anti-Semitism summit this week, the Anti-Defamation League gave its ADL Americanism Award to Lt. Gen. Jay Silveria, superintendent of the Air Force Academy, for his famed speech last September denouncing white racists for scrawling antiblack slurs on the dorm door of a black student.

Silveria’s order to racists to “Get out” (an admiring reference to the antiwhite horror movie) was celebrated by the media, with Silveria being declared 2020 presidential timber and an admirable rival to the deplorable Donald Trump. Silveria was especially adulated for dog-whistling:

We would also be tone-deaf not to think about the backdrop of what’s going on in our country—things like Charlottesville and Ferguson, the protest in the NFL.

The only problem with the ADL’s ceremony honoring Lt. Gen. Silveria’s “commitment, dedication, and leadership in the fight against hate” was that six days earlier the Air Force Academy had admitted that the graffiti had been a hoax perpetrated by an unnamed black student.

In other words, the Air Force Academy incident had indeed been a racist hate crime, but, contra General Silveria, one perpetrated to spread fear and loathing against its white victims.

The ADL, however, is not in the business of letting reality get in the way of business.

“The ADL is not in the business of letting reality get in the way of business.”

Granted, the ADL, with $81 million in net assets, isn’t as rich as the money-crazed Southern Poverty Law Center, America’s most lucrative hate organization. Still, the ADL has done very well for itself in its 104 years of activity, collecting, for instance, $56,000 over the years from Donald Trump.

Trump’s election has provided the ADL with a profitable pretext for ramping up fund-raising efforts. Jewish Insider reported a week after the 2016 election:

The Anti-Defamation League has seen a dramatic increase in online donations since the election of Donald Trump, new data shared with ‘Jewish Insider’ showed…. Last Wednesday, the day after the surprising election results, the ADL received a 50X increase in online donations, mostly from new donors…. “We are heartened by the outpouring of support that we and reportedly other nonprofit organizations in this field have received over the past week,” ADL CEO Jonathan Greenblatt told ‘Jewish Insider’…. ADL is kicking off its inaugural “Never is Now!” two-day summit in New York City on Thursday to address some of the most urgent challenges facing the Jewish community and identify new strategies to effectively combat anti-Semitism. Tickets to the events are sold out, according to ADL.

Last winter, for example, the ADL had been doing well off blaming the sudden spate of threats against Jewish community centers upon Trump.

But then it turned out that eight of the calls had been made by a black leftist journalist named Juan Thompson. And next it emerged that up to 2,000 threats were the work of an energetic young Jewish man in Israel with dual Israeli-American citizenship, Michael Ron David Kadar.

Undeterred, the ADL responded to Kadar’s arrest in Israel not by demanding his extradition to the U.S. but by issuing an amusing press release announcing:

While the details of this crime remain unclear, the impact of this individual’s actions is crystal clear: These were acts of anti-Semitism.

Similarly, Silveria’s disgrace didn’t dissuade Jonathan Greenblatt, the head of the ADL, from honoring him for stoking hatred.

Similarly, Kansas State University discovered last week that its nationally publicized antiblack hate crime on Halloween was actually another antiwhite hate hoax. Likewise, the destruction of a Jewish ceremonial tent at Kansas State earlier in the fall had not been anti-Semitic violence by vicious Trump supporters as originally theorized, but an Act of God: A gust of wind had blown over the tent.

Nonetheless, KSU president Richard Myers announced, without mentioning the hoax, that he was suspending classes for two hours on Tuesday of this week for a rally against racism. With 24,766 students and an out-of-state tuition of $23,000, wasting a quarter of a school day at KSU to fulfill the goals of the hoax would appear to cost nearly a million dollars.

That would seem to be atrocious management. Yet ask yourself: What bureaucrat has ever gotten in trouble for falling for a hate hoax? After all, the concept of a “hate hoax” has been successfully kept out of the mainstream mentality. In all its years since its founding in 1851, The New York Times has never once used the words “hate” and “hoax” consecutively.