Digging Up My Roots With a Cyber-Shovel 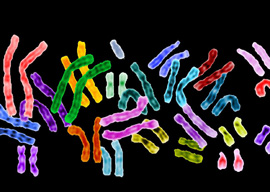 In The Odyssey, Theoclymenus asks of Telemachus, “Among men, who are you? Tell me also of your city and parents.” Old-fashioned folks who haven’t been poisoned by the current age will ask similar questions. The answers are generally more revealing than what passes for modern small talk. These days, one can answer questions such as this by spitting into a test tube.

Genetic anthropology is a new field made possible by the availability of inexpensive DNA microarray chips. Physical anthropologists have speculated for over a century as to the origins of different tribes of men based on anthropomorphic measurements, paleoanthropology, linguistics, archeology, and studying place names. My modest studies of the Anglo Saxon language indicate that the physical anthropologists of over 100 years ago knew rather a lot about recent human origins in well-studied places such as Great Britain. With the advent of cheap gene sequencing, researchers are able to study prehistoric human migrations in the absence of other kinds of evidence. New knowledge about one’s origins also becomes available to the individual almost as soon as it is available to the scientific community.

“These tests do get the broad strokes right. For people who have only vague ideas as to their ancestry, the results will be enlightening.”

Amateur genealogists were early adopters of this technology. Folks interested in their patrilineal line could get their Y chromosome sequenced. For the matrilineal line there are mitochondrial DNA tests. In both cases, the DNA is passed down the respective lines unchanged, excepting for chance mutations. Other genealogical tests compare “autosomal DNA“ (AKA the part of your genetic code which doesn’t relate to sex) to folks who submitted their genetic code to the database. This is useful for finding distant cousins who could potentially fill you in on blank spots on the family tree.

According to my testing service, my Y chromosome (haplogroup R1b1a2a1a1*) originates from a Stone Age Atlantis in the North Sea known as “Doggerland.” Much as I’d love to imagine myself as a man from some forgotten Atlantis, this story is almost certainly fanciful nonsense. Doggerland is real, but the idea that my particular Y chromosome has something to do with it originated in a discussion on an online forum. It is not based on any deep analysis of empirical data; it was an individual’s guess based on incomplete data, and many well-informed people think it was a bad guess. At present, nobody really knows the tribe from which my Y chromosome is derived. Thus far, we only know that they were Northern European: Celts, Saxons, or pre-Indo-European aboriginals, with the prevailing wisdom leaning toward Germans. As my Y-chromosome group is fairly common in Scotland and my name is supposed to be Scottish (a people made up of Celts, Germans, and aboriginals), I’ll split the difference. One interesting negative result from the Y chromosome test: Though my Scottish clan was allegedly founded by a son of the legendary 5th-century Irish King Niall of the Nine Hostages, my Y chromosome indicates that I’m not a direct descendant of his.

My autosomal DNA results netted several distant cousins from the Hoffman side of my mother’s family. Grandpa always maintained that the Hoffmans were ordinary Germans, but the big noses in the family pictures had us wondering if they might be from one of Israel’s lost tribes. My distant Hoffman cousins informed me that the Hoffmans were ordinary gentile Germans originally from Bavaria. So much for my Israeli passport.