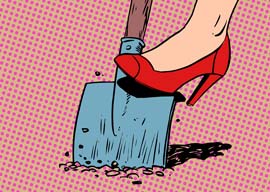 Stop me if you”ve heard this one before: There are some jobs Americans won”t do. Therefore, we need Third World labor to come pick up the slack.

If I had a nickel for every time I heard that line parroted in the press, I”d cover the yearly salary of all the migrant strawberry pickers in California.

Regrettably, the “jobs Americans won”t do” trope is treated like just another piece of locus communis. Economists repeat it endlessly. Big-business types love to deploy it (and collect the windfall profits from employing cut-rate labor). Media moguls believe it. Politicians, both Democrat and Republican, robotically repeat the claim, as if it were fed to them by the Chamber of Commerce.

This election cycle has brought new life to the issue of the Third World’s untrammeled access into the United States. But it hasn”t changed the conventional wisdom on the “jobs Americans won”t do” line. Nearly every candidate is in favor of guest-worker programs, which basically means providing an ample supply of cheap, fungible labor for business.

“There is nothing demeaning about grunt work. Labor is dignifying.”

Even real estate magnate Donald Trump (say it ain”t so!) buys into the notion. When challenged by Sen. Marco Rubio in a recent debate for hiring Mexicans to work at his Florida hotel, Trump defended the practice, claiming “people didn”t want to have part-time jobs” and that he “couldn”t get help in those hot, hot sections of Florida.”

Trump’s thinking is far from unique. Yet the idea that there are some jobs Americans are too proud to do is pure hokum. From a data perspective it doesn”t make sense. And from a purely rational view it doesn”t hold up, either.

First, the numbers. A 2013 study from the Center for Immigration Studies reports that only six out of the 472 civilian occupation categories in the U.S. are filled primarily by immigrants. That’s about 1% of the entire workforce. Professions normally thought of as immigrant-dominated, such as janitorial work and cleaning services, are actually staffed primarily by those native-born.

Of course, you won”t hear those figures from someone like Senator Rubio, who, despite his criticism of Trump, justifies more immigration by saying there are some American workers who “can”t cut it.” One wonders what the reaction would be if Rubio said that to an unemployed American. Would a laid-off blue-collar worker take kindly to being told that he can”t work with his hands as well as someone in this country illegally?

The answer is obvious”especially in an economy where the labor-force participation is at a historic low.

Then there is the issue of reduced wages, which both progressives and free-market conservatives seem to believe is a great thing for competitiveness. We”re told that the industries illegals predominantly occupy pay little and that Americans aren”t willing to accept a pittance for taxing physical labor. Our countrymen have families to raise. They can”t afford to care for their children with a down-market wage.

But whoever said that jobs like plucking vegetables or folding towels were full-time positions? Sure, they are low-skilled, unpleasant, and sometimes hard on the body. But they are not careers. These aren”t jobs meant to provide for 3.14 persons. Monotonous work pays little because it doesn”t require much abstract thinking or innovation. Thus, they are the perfect jobs for those first entering the working world.