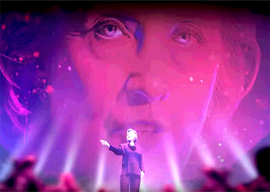 Dinesh D’souza is a funny little man who is actually of normal height but looks so unthreatening, you can”t help but think what a cute kid he must have been. You”d be forgiven for assuming he was asexual until you meet his wife, who is a pulchritudinous Latina from Venezuela with a sassy attitude that includes seething vitriol when it comes to the subject of ChÃ¡vez. I met both of them in New York on Friday, and it was fun because I had just seen Hillary’s America: The Secret History of the Democratic Party, which is quite possibly the greatest documentary of all time.

The film unequivocally lays out the case against Hillary, and it is killing it at the box office. With distribution in over 1,200 theaters and $5.2M in its first twelve days, it’s the No. 1-grossing political documentary in the country ($1.4M more than Michael Moore’s Where to Invade Next) and No. 8 of all time. D’souza’s previous film, America: Imagine the World Without Her, was the highest-grossing documentary of 2014, and his other big hit, 2016: Obama’s America, is the second-highest-grossing political doc ever, right behind Moore’s Fahrenheit 9/11.

“If you already know Hillary is a crook, this will solidify your argument and make you a force to be reckoned with at dinner parties.”

Liberals see Moore as Goliath and D’souza as an irritating gnat buzzing around the truth, but the truth is, they are worthy adversaries. “I learned a lot from Moore,” D’souza explained while drinking water to preserve his voice on this whirlwind press tour. “He is great at mixing important information with entertainment.” This is the future of the right. The days of somber, boring hate facts are over (sorry, National Review). Trump has rebooted the party and it’s now about shameless Western chauvinism and the love of a good fight. D’souza is no stranger to confrontation. He came to fame taking on heavyweight atheists such as Christopher Hitchens and Sam Harris and quickly moved up to tackling the president himself. Obama’s America was a huge embarrassment to the administration. They called it “an insidious attempt to dishonestly smear the president” and threw D’souza in jail for eight months. The specific legal definition of the charge is the curiously Orwellian “Causing the government to file a false document,” and it’s a felony punishable with five years in prison. What really happened was he encouraged some friends to donate $10,000 to a politician when the limit is $5,000. This crime is almost always punished with a slap on the wrist, and it’s wildly hilarious when compared with any one of Hillary’s various crimes. In fact, the rapists and murderers he was housed with laughed their heads off when they found out what he was in for.

Obama likely high-fived Michelle after D’souza was sentenced, and assumed the pest from Mumbai was finally done for. What the president probably didn”t realize is that like de Tocqueville, D’souza is a student of his surroundings and treats every experience like it’s going to be on the final exam. “I learned a lot in jail,” he said, “and I came out a much more hardened and realistic conservative. I used to see the 2.2 million incarcerated as simply criminals who had broken the law, but after meeting these people I realized the gangs inside are very much like the gangs in the White House.” For example, in the film we see how D’souza learned that most major crimes follow the procedure of plan, pitch, take, and deny. You plan to fake out insurance companies. You create a fake corporation. You pitch people on signing up. Then you kill them, take the money, and deny everything. Hillary and the Democrats have done this again and again. Take Obamacare. You tell people you can get them cheap insurance without mentioning you”re going to force them to take it (“If you like your health care plan, you”ll be able to keep your health care plan”). Then you tell the insurance companies to drop their price a tiny bit in exchange for a tidal wave of new customers. You”ve now forced everyone to go to Costco, and the only person who loses is the consumer. Plus, the Democrats now control health care, which, as we learn in the movie, is one-sixth of the American economy. The Clintons are also masters of this. Their friend wants to mine uranium in Kazakhstan but the corrupt dictator there won”t allow it. Bill goes and delivers a speech that exonerates the dictator of all his crimes and pretends he’s a nice guy with a great human rights record. The dictator then allows the Clintons” friend to mine and everyone gets a cut. Hillary takes it a step further by getting involved with uranium so heavily, Russia wants a piece. Giving our enemies the ability to make nuclear weapons is something the secretary of state is meant to prevent, not facilitate.