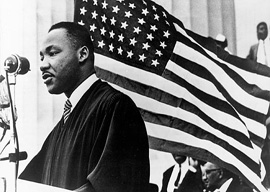 Whereas the frequent meeting of considerable numbers of negroe slaves under pretence of feasts and burialls is judged of dangerous consequence, it shall not be lawfull for any negroe or other slave to carry or arme himselfe with any club, staffe, gunn, sword or any other weapon of defence or offence.

This must be news to gun-control advocates. ThinkProgress, much like The Daily Beast, also cites the failure of slave uprisings as evidence against the power of guns. One reporter wondered why Nat Turner’s “armed revolt“ still resulted in the execution of 56 blacks and the murder of 200 or so others. It’s because slaves were legally prohibited from owning guns in Virginia. The rebellion failed because the rebels were only “armed” so far as makeshift knives and dull axes constitute weapons.

I challenge anyone to find me a single illustration that depicts Nat Turner wielding a gun.

In light of all this, why do modern liberals continue to balk at claims such as Ward’s? Could it be that for the past many decades, the left has held such a dominating influence over minorities that it’s refusing to concede responsibility for gun control’s historical role as a tool of black oppression?

Claiming stake in a minority voter base is no reason to ignore original documents. Absolute freedom is the underdog’s only companion, no matter how often his or her enemies try to paint it as racist. Gun control has always been a slave owner’s favorite defense against rebellion.

And there is more than one kind of slavery.