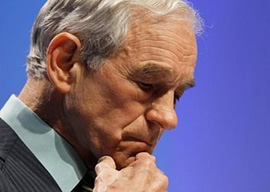 On multiple occasions, Paul has stated that he: (1) doesn’t know who the author was, (2) takes full responsibility for the newsletters being published under his name, and (3) denounces their content. Yet Gloria wouldn’t let up with her antics.

“Goodbye,” Paul said, then calmly walked away. Although initial news reports gave the impression that Borger’s badgering caused him to stomp out of the interview, this wasn’t the case.

“Obama apologists can feel free to hold up that race card when the debates get tougher, but libertarians can hold it up longer.”

Sean Hannity and other right-leaning pundits have asked Paul equally stupid questions over the years, so it isn’t only left-wing news outlets.

One of Paul’s most popular stances is his strong rejection of the War on Drugs, which had been a non-issue until he came into the mix. Substance prohibition in American history has frequently been entwined with anti-minority ideology. In the early 1900s, marijuana was denounced as a drug that polluted the white race and turned Mexicans into murderous lunatics. The same thing was carried out against Chinese immigrants and blacks through anti-opium and anti-cocaine legislation, respectively.

Anti-drug laws still disproportionately affect minorities. A 2009 Human Rights Watch study concluded that “an estimated 67 percent of convicted felony drug defendants are sentenced to jail or prison.” Relative to population, “blacks are 10.1 times more likely than whites to be sent to prison for drug offenses.”

The Root, a black-oriented website, referred to ending drug prohibition as the “most meaningfully pro-black policy today.” The NAACP accepts this thesis and passed a resolution earlier this year to end the War on Drugs.