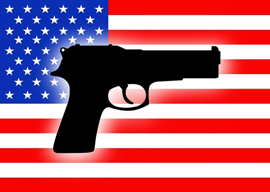 In his recent piece for Takimag (“Gun Control and the Scope of Ethics”) Alexander Fiske-Harrison confesses to “complete mystification” concerning the gun-control debate in America. This frank admission of ignorance notwithstanding, he goes on to critique (typically, as “absurd”) what he cannot understand. I would certainly agree that Fiske-Harrison is mystified, as he describes an America which simply does not exist:

My problem is with why so many of you seem to fight so hard against stopping people who are completely ignorant of gun usage and safety or, worse, have histories of criminality or mental health problems, from walking into shops, buying a gun, and then being allowed to carry it with them wherever they wish to go. … why object to rudimentary training and testing?

Do you know anyone who believes that criminals and crazy people should be free to buy guns and carry them around? Even the most die-hard gun-rights advocates agree that some restrictions on gun ownership are necessary. Federal laws already exist, binding on everyone, which prohibit felons, drug addicts, domestic-violence offenders, and the mentally ill from buying or possessing guns, and prohibit others from selling, giving, or lending guns to them. Even the concealed-carry permits issued to law-abiding citizens don”t allow them to carry their guns “wherever they wish to go.” And they require training and testing”and a background check”before they are issued. I took such a class in Tennessee”put on by our local sheriff and his wife”which included live fire with the gun I intended to carry, out to a distance of 25 feet. Had I not demonstrated reasonable competence with my pistol, and a thorough knowledge of relevant laws and safety practices, I would not have received my permit.

Bottom line: No one is advocating the unrestricted gun freedom which Fiske-Harrison describes. Nowhere does such freedom exist. And no one is “fighting hard” to have existing restrictions repealed.

“Do you know anyone who believes that criminals and crazy people should be free to buy guns and carry them around? Even the most die-hard gun-rights advocates agree that some restrictions on gun ownership are necessary.”

Indeed, his essay abounds with such false claims. He self-identifies as a gun owner, and says he opposes banning guns. Yet he appears to be quite content with current British gun laws, which are draconian by American standards: not only are concealed-carry permits not issued in Britain; pistols have been banned entirely! All pistols, both revolvers and semi-automatics, are illegal to possess! Even in one’s home! This law is so strictly and universally enforced that even the British Olympic pistol team must go abroad to practice.

Yet Fiske-Harrison implies”without stating it outright”that British and American gun laws are more or less equivalent, both enshrining the right to keep and bear arms:

America has good historical reasons for the existence of its 1789 Bill of Rights”the year of the French Revolution, in case you have forgotten”just as my country Britain had for its own a century earlier, both of which enshrine the right to keep and bear arms.

Does Fiske-Harrison not realize that from the American perspective”using our Second Amendment and state and federal gun laws as the standard”the right to keep and bear arms no longer exists in Britain? Far from enshrining it, the Brits have amputated it almost beyond recognition. Treating the two nations as if their gun policies were in any way similar is disingenuous at best. It mystifies me why Fiske-Harrison would attempt to foist such misinformation upon us.

But he shows his true colors when he argues that “the state has, and should have”in large part”a monopoly on the legitimate use of violence, and therefore on the tools of violence,” revealing himself as an opponent of the Second Amendment, which stipulates specifically that the state shall not have a monopoly (“in large part””whatever that means”or otherwise) on tools of violence: that citizens too have the right to utilize those tools. “The legitimate use of violence” includes citizens” use of firearms”including pistols“in lawful self-defense.

What Fiske-Harrison’s words do accurately describe is the current state of affairs in Britain, where the state does possess a complete monopoly on specifying the conditions of gun ownership. Is Fiske-Harrison mystified that we Americans do not wish to surrender our freedoms in a similar fashion?

He clearly prefers the European way (of citizen disarmament), and judges America by the European sensibility: “The statistics on gun homicide in the U.S. are simply absurd when read by every other civilized country in the world.” He quotes statistics that a U.S. citizen is 54 times more likely to die by gunshot than is a citizen of Britain.

What I find absurd is Fiske-Harrison’s contentment with a government that won”t allow him to own a pistol in his own home, and his unwillingness to mention this inconvenient fact while boasting about how his nation has enshrined gun rights. For my part, I”ll gladly suffer the increased risk he cites, in return for the freedom to own the means of self-protection.

What should also be pointed out is that gun crime in the U.S. is to a large extent concentrated in isolated areas, mostly decaying inner-city neighborhoods. Most people avoid them. Outside of these high-crime zones”that is, in the vast majority of places”there is a much lower incidence of gun deaths, and gun violence is not a concern. Much of this inner-city gun violence is gang- and drug-related; and to be honest, no one gets too upset when a couple of crackhead gangbangers”whatever their race”off each other …

And as for those who are in favor of the National Rifle Assocation-promoted argument that most of those statistics represent gangs of nonwhite origin killing their own: aside from being repugnantly racist and showing nil respect for the rule of law …

So … pointing out that a large percentage of the recorded “gun-related violence” involves nonwhite bangers shooting each other somehow reveals a disrespect for the rule of law? Try as I might, I can”t make sense of that statement…

And not just racist, but “repugnantly racist”! (Is he implying the existence of a non-repugnant racism?)

In any case, the fact remains that in most areas of America, gun violence is not something anybody worries about.

“… they”re also tactically deluded. They assume that as long as someone has a pristine Sig they”ve no training with in their bedside drawer, they”ll stand a chance when battle-hardened, tooled-up gangbangers come through the front door. They won”t.”

Here again Fiske-Harrison sets up a straw man position which no sane person holds, then proceeds to refute it. In fact, no one I know imagines that they can just buy a gun, not bother to train with it, and be well protected.

Just the opposite, in fact: we gun owners are constantly being reminded by our peers that training with our weapons is an essential part of responsible gun ownership. Classes on proper gun handling technique and gunfighting tactics abound. There are plenty of well-trained gun owners with well-used Sigs (my own two have had thousands of rounds through them; one of them rides happily on my hip as I type this) who would be more than a match for A. F.-H.’s hypothetical gangbangers, who (the bangers) probably have not trained or done much practicing.