Disenfranchising the Dead and Nonexistent 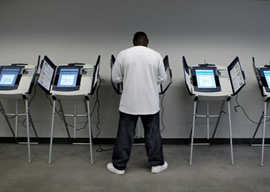 In a country that has a black president, the NAACP—a black organization—warns that blacks are being disenfranchised? There are currently more than 15 million registered black voters in America—more than ever. So much for their “disenfranchisement.”

Nevertheless, the NAACP fears that America’s black president is in jeopardy. To be fair, with chronic unemployment worse than any time since the Great Depression and Obama gunning to become the most free-spending president ever, he has not exactly channeled Jackie Robinson’s ghost when it comes to representing black “firsts.”

Let’s not even deal with the facts right now.

The facts are that Obama has lost his glow in the black community; OK, the American community.

“If anybody has a reason not to vote for Obama, it’s black people.”

It’s time for the NAACP to whip out the race card and accuse the Republicans of wanting to suppress the minority vote.

A similar charge was waged against the Republicans back in 2008, when America was on the precipice of electing its first half-black president the first time. As USA Today reported:

Benjamin Jealous, who took the helm of the National Association for the Advancement of Colored People on Sept. 15, said volunteer lawyers have already been addressing complaints about voter registration problems. On Election Day, lawyers will be sent to the 750 precincts where there has been a history of voter discrimination, Jealous said at the state NAACP convention.

Note: “750 precincts where there has been a history of voter discrimination.” Translation: White areas.

It appears that the NAACP thwarted the conspiracy in time, and Obama was elected. All was good in the world. America had finally elected its seventh black president, but everybody knew this one was black.

Upon Obama’s election Democrats proclaimed that the Republican Party was dead. America had a new messiah, and there was nothing the Republicans could do. Michael Eric Dyson said that Obama brought “sexy brilliance” to the White House. Democrats said things like, “It’s good to finally get a smart president in the White House.” America was now Utopia.