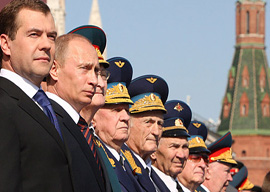 As predicted, United Russia lost ground in Sunday’s Duma elections. In fact, they did worse than expected, and observers inside and outside the country say they would have done even worse if the election had been run fairly and honestly. United Russia will have 238 seats, the Communists 92, Zhirinovsky’s Liberal Democrats 56, and the supposedly Social-Democrat “A Just Russia” 64.

All parties except for United Russia have threatened to file legal complaints, regardless of whether or not they performed well. There are reports of opposition websites being hacked as well as more traditional methods such as multiple voting and intimidation.

The Duma elections reflected Russian attitudes more than next year’s presidential elections will. Mr. Putin, now prime minister and president-to-be, is not going to lose. There will be no serious candidates against him and if anyone tries to stand, reasons will be found why he or she cannot be registered, cannot hold public meetings, and cannot be in the media. On Election Day, voting stations will be carefully monitored and voters will be told that their vote counts—in their lives and careers as well as those of their families. Even for the Duma elections the only party aside from United Russia given the green light was the Communist, on the mistaken assumption that people would not vote for them. In fact, Reuters and other media outlets described all the opposition parties that did better than expected on Sunday as left-wing. But there is no explanation as to how they might be to the left of United Russia, which has proved to be authoritarian, corrupt, and a believer in what it calls sovereign democracy, otherwise known as state control.

“The world refuses to see Russia as the victim.”

The mantra in the West for years has been that Vladimir Putin, Russia’s once and future president and its present prime minister, is immensely popular in the country. To prove this, United Russia has organized a youth movement, encouraged pop songs about the man, and smiled benevolently at hysterical fan mail that allegedly came from women of all ages. Questions as to why a supposedly popular leader and party need to ban all non-supportive demonstrations, beat up small groups that meet in opposition, and block serious presidential candidates are brushed aside.

The war in the Caucasus has had considerably less coverage under Putin than under Yeltsin. Putin’s government appeared to be just the sort of forceful presence the country needed after the chaos and sudden fall in living standards that weren’t so high in the first place. He imposed order on the tax system and control on the highly unpopular “oligarchs” who had close links with many of the so-called democratic politicians. He presided over a rise in living standards. Anyone who knows the country and remembers what it has been like in the last twenty or thirty years can attest that until very recently, life was considerably better for more people in Russia than it had been in living memory. That counts for a lot, but not forever. As people adjust their expectations they raise them ever higher and become more unruly when there is a fall. Recent economic problems have produced the sort of uncertainty that was endemic under Yeltsin: high unemployment in many parts of the country and displays of incompetence that verge on criminal. Last winter a Moscow airport became a complete shambles. Large areas around the capital had no power during the coldest period. Ships were stuck in the ice for days on end. And those were only the stories that the media reported.