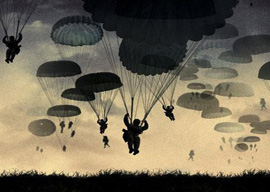 The most colossally, tsunamically, head-explodingly stupid statement ever uttered on the subject of diversity was made by a military man. Army Chief of Staff Gen. George Casey told George Stephanopoulos on live TV back in 2009:

What happened at Fort Hood was a tragedy, but I believe it would be an even greater tragedy if our diversity becomes a casualty here.

The enduring mystery remains: Why didn’t Gen. Casey, on all the evidence a decent man and a soldierly soldier, do the honorable thing once he realized what he had said—viz., retire to his private chambers with a loaded revolver and a bottle of scotch?

It is hard to square the diversity ideology with reality in any part of our society, but perhaps nowhere harder than in the military. A civilian sufficiently irked by diversity can just move away from it. Military people don’t have that option.

Many components make an effective military unit—training, confidence in one’s leaders, assurance of supply—but one factor stands above the rest. To quote from Steven Pinker’s new book (p. 355): “Studies of military psychology have discovered that soldiers fight above all out of loyalty to their platoonmates.”

The logic of evolution, as well as our own instinct, tell us that this kind of loyalty comes most easily when the platoon are all kin or believe they are a “band of brothers.” In the modern world few of us belong to a kinship group big enough to supply a platoonful of young males, so the kinship needs to be manufactured. Fortunately this is something we can do by enlisting other kinds of affinity to the purpose.

“It is hard to square the diversity ideology with reality in any part of our society, but perhaps nowhere harder than in the military.”

A notable example was the Pals Battalions of the WWI British Army. The BBC history website explains:

With conscription politically unpalatable, [War Minister] Kitchener decided to raise a new army of volunteers.…The call to arms was augmented by the decision to form the units that became known as Pals Battalions. General Henry Rawlinson initially suggested that men would be more willing to join up if they could serve with people they already knew.

The affinity binding the Pals Battalions was mostly local. Battalions were formed from men of the same town or district. There were some variations, though.

Battalions such as the Hull Commercials shared an occupation; others, like the Glasgow Tramways Battalion, shared an employer; the Tyneside Irish had a common background.…In East Grinstead a sportsman’s battalion was raised, including two famous cricketers and the England lightweight boxing champion; London formed a footballers’ battalion and there were also units comprised of artists….

The Pals Battalions were massacred in the Battle of the Somme, after which conscription took over. That was a consequence of bad strategy, though—no fault of the Pals. Indeed, the courage and resolution with which they advanced in extended line into raking machine-gun fire testifies to their bonding, to the loyalty they felt for each other.