Do Italians Do it Better? 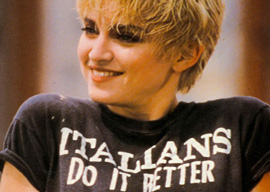 That slogan on pop star Madonna’s T-shirt “Italians do it better!“ may date back to the 1980s but it is still popular with Italian men. They often deploy it to impress foreign women they have just met.

Do what better? Cheat you, betray you, rip you off, and stab you in the back?

The phrase chimes nicely with their worldwide reputation as the apotheosis of that prized breed of male known by the term “Latin Lover,” which dates back at least to the days of the great Giacomo Casanova himself.

But is it true these days?

I have no hands-on experience of Italian men in this regard because I am not, as far as I know, a homosexual.

But I do know a thing or two about Italian women. I am married to an Italian woman who is the mother”God bless her or perhaps God help her”of my five small children.

As a bona fide English gentleman, I cannot possibly divulge any details about what Carla does better or worse than, say, an Englishwoman.

But probably because I envy their prowess and maybe I might learn something, Italian men interest me.

So yesterday morning I asked Carla: “Tell me, tesoro (treasure), is it true that Italian men do it better than Englishmen as Madonna said?”

Your guess is as good as mine, or that of the experts. Nowadays the 53-year-old drama queen preaches peace not sex as we have been forced to notice after her false comparison during her current world tour of French Presidential candidate Marine Le Pen with Hitler. But whatever La Ciccone had in mind on the sex front a quarter of a century ago, Italian men have made her slogan their own.

Once we had cleared up whether I meant Madonna as in “Like a Virgin” or Madonna as in “the Virgin Mary,” Carla came straight to the point: “No,” she replied. And I thought: “That’s my girl!”

You might say: “Oh yeah, she just doesn”t want to hurt your feelings!” Well, such concerns have never stopped her in the past.

I then asked: “OK, but Italian men must be doing something better than the rest of us to deserve all the praise heaped on them, no?”

Although things were a little calmer than usual in our house with the two eldest, Caterina (eight) and Francesco Winston (five) at school, nevertheless Magdalena (four) and Rita (three) were darting noisily about, and Giovanni Maria (six months) was bawling away as he does when not attached to his mother’s breast.

But Carla eventually addressed my question: “Italian men are like mosquitoes”they never give up. They get you because, as with the mosquito, you”re exhausted and you fall asleep. But it’s different with the younger ragazzi under 30. They”re so petrified of girls.”

She blames feminism”which she hates”for this. I find her hatred of the sisterhood bizarre, as nearly every other woman I have met of my age or younger has been a fully tooled-up feminist.