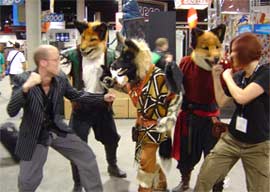 Excuse my language, but what the heck kind of world do we live in where a bunch of adults can”t get together for good times and fellowship dressed as anthropomorphic animals without some twisted soul trying to gas them to death as if they were all Jews in Nazi Germany?

In a narrow sense, I can empathize with those who wish to dress up as animals. As a child of about six, I dressed for Halloween from head to toe in a store-bought costume as the predatory and mischievous Sylvester the Cat, the eternal feline antagonist of the more charming and elusive Tweety Bird. But at no point”not then, nor ever since”did I entertain fantasies of sexually penetrating or otherwise raping Tweety. And after this single incident of anthropomorphic costumery, I never again felt compelled to repeat such behavior. I tucked away the costume in our basement cedar closet and got on with my studies.

Others are not so fortunate. The species-crossing behavior follows them well into adulthood. Many of them even lead productive and well-adjusted lives. But others”as we shall soon see”suffer scorn, persecution, and large-scale attempts on their lives.

“This was Kristallnacht for adults who wear animal costumes. Luckily, it didn”t turn into Auschwitz.”

Perhaps you are incognizant of the surprisingly pervasive subculture wherein living, breathing, at least partially sentient, and fully matured human beings adorn themselves in elaborate cartoonish animal costumes and refer to themselves as “furries.” They engage in “furry fandom“”which Wikipedia describes as “a subculture interested in fictional anthropomorphic animal characters with human personalities and characteristics””and often congregate at “furry conventions“ nationwide.

With over 18,000 articles and counting, the website WikiFur tells you everything you needed to know about furry fandom as well as everything you will eventually wish you”d never been told. But for the sake of decency and equity and tolerance, you must ignore what your gut instincts immediately tell you”this is not a mental illness. It is an alternative identity that one must not mock lest one risk being deemed intolerant.

You should also get your mind out of the gutter, for furry fandom is not exclusively a sexual fetish. For some it is merely an oddball form of sci-fi fantasy cartoon-animal fixation born in childhood and extending well past puberty”for some, even past menopause. Yet it is a pronounced kink amid a certain subset of adherents, who will spend thousands of dollars on “fursuits” equipped with strategically placed genital holes that allow men dressed as foxes to perform coital and sodomitic acts with humans of indeterminate gender dressed as chickens in lewd and frankly ribald displays of a fox doing a chicken doggy-style. Such unsettlingly specific sexual fixations have given rise to an underground of anthropomorphic pornographic artwork featuring ample-breasted female leopards with semen dripping from their vulvas and men in bird suits mounting women in cat suits from behind.

And naturally, because these people constitute a sexual minority, there are those who seek to do them harm. Sooner or later, there will be a young adult male innocently dressed as a unicorn who will tragically lose his life and become the Matthew Shepard of furry fandom.