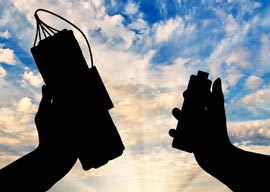 Of all the people I don”t envy, of all the unfortunates who labor away at the type of dirty jobs that would make Mike Rowe throw his hands up in frustration, the ones I pity the most are Muslim apologists. Sisyphus has nothing on these poor bastards. Muslim apologists are like children who rejoice at ebb tide, building sand castles and declaring victory over the ocean itself, only to watch in disbelief as the tide returns and buries the day’s work. Believing the flood tide to be a fluke, the children happily begin anew at the next ebb.

I suppose the best I can say is that Muslim apologists are like Sisyphus without the curse of retention or cognizance. After every incident of Muslim terror, the apologists reassure us that there is no pathology, no pattern, no problem. That cafÃ© could have just as easily been shot up by the Amish; the folks at that Christmas party would probably have been butchered by Buddhists anyway. By an arbitrary role of the dice, by pure random chance, this time it was Muslims committing the crime.

I”ve written about the apologists before, but in the past few weeks, there’s been an interesting new addition to their canon. We”re already familiar with the apologists” first two mindlessly repeated articles of faith:

(1) There is nothing uniquely Islamic about Muslim terror. The Muslim community is no more predisposed to committing acts of terror than any other religious, ethnic, or racial group.

Been there, heard that. Over and over again.

“If white Christians constitute a greater threat than Muslims, then surely those who recruit them to terror via blanket condemnations must be stopped at all costs.”

Here’s the new talking point, repeated again and again by newsmakers over the past two weeks: Donald Trump is the top recruiter for ISIS. We heard it from Hillary Clinton, Andrew Cuomo, Ted Koppel, and Tom Brokaw, among many others. The gist is, Trump’s “total and complete shutdown of Muslims entering the United States” comment is “making” Muslims join ISIS. Trump’s suggestion of a blanket ban is enough to make Muslims say, “To hell with my life, my family, my job…I”m going to join ISIS, because Donald Trump made a sweeping, indiscriminate generalization devoid of nuance.”

So much for the “Muslims are as afraid of ISIS as we are” talking point. Apparently, all it takes to get Muslims to sign up for a life of terrorism is one speech by a wealthy reality-show star who holds no office. I mean, joining ISIS is no small commitment; it’s not like changing your vote come Election Day, or registering for a different party. The political and media elites really want us to believe that all it takes to get Muslims to devote their lives to ISIS is a speech by Donald Trump.

The notion that average Muslims teeter so precariously on the brink of “going jihad” that one speech by a businessman-politician could cause them to chuck their normal lives and throw in with a bunch of murderous sadists reflects, at its core, a truth“one that the apologists have for years been trying to avoid: “Ordinary” Muslims become radicalized far more readily and with greater frequency than the rest of us. Again and again we hear of Muslim terrorists who “only recently” embraced jihad, often with such speed that friends and family members barely had time to notice. In a previous piece, I likened the ease with which Muslims can become radicalized to the ease with which the elderly can get pneumonia. It doesn”t mean that only the elderly get pneumonia, or that all elderly people get pneumonia; it just means that they are more likely to get it.

It’s like having a compromised immune system, but rather than compromised immunity, Muslims appear to have compromised stability. They can, and do, go jihad at the drop of a hat. Physician, psychiatrist, soldier, rich man, poor man, husband, wife, father, teen; there’s no single profile for the ones most likely to snap, other than that they”re Muslim.

Last week, as endlessly repeated chants of “Donald Trump the ISIS recruiter” danced in my head (a welcome respite from the seasonal sugar-plums), a thought occurred to me. An epiphany, if you will. If the three main apologist talking points are correct”if Muslims are no more predisposed to terrorism than other people, if white Christian terrorists pose the greatest threat to the U.S., and if a blanket generalization by Donald Trump is enough to turn Muslims into terrorists”then blanket generalizations about white Christians must be even more dangerous. If Muslims are no more terror-inclined than white Christians, and if Muslims can be “recruited” to terror by hearing or reading blanket condemnations of their group, then by logical extension, so can white Christians. And if white Christians constitute a greater threat than Muslims, then surely those who recruit them to terror via blanket condemnations must be stopped at all costs. That is the logical conclusion if the apologists” talking points are to be believed.

I decided to reach out to the authors and editors of some of the most infamous recent blanket condemnations of white people. Amazingly, I found them all at Salon.com (how very convenient). I sent each of them this email:

Do you think it might be a possibility that the various pieces (by you and others) that make blanket criticisms of whites (“White guys are killing us,” “The plague of angry white men,” “Let’s deport all white males,” “White men must be stopped,” “White men are the face of terror,” “The plague of angry white men,” “Deal with your shit, white people,” “Why is it always a white guy: The roots of modern, violent rage,” to name just a few) might help white hate groups recruit new members? I”m not looking to debate the veracity of the criticisms of white America expressed in those pieces; I”m only asking if you think that, possibly, such blanket condemnations assist white hate groups by serving as recruitment tools.

Frank Joyce, the author of “White men must be stopped,” did reply. However, Joyce, an old-school Detroit labor activist, seemed more interested in apologizing for the title that Salon gave his essay: “As you probably know, authors don’t write headlines, editors and headline writers do. Their interests aren”t identical. Authors may want to gently persuade. Editors want to “sell newspapers.”” Frankly, it never occurred to me that Salon’s hate-filled race-baiting has grown so extreme that even some of its own authors are appalled by it.

Regarding my actual question, Joyce would only say, “It’s a good question that deserves a thoughtful reply,” but he replied only in very general terms: “The question of how to help people see very emotional issues differently is anything but easy. Decades of psychological, neuroscience and market research leave us with still a long way to go in understanding how humans change their mind about anything.” Joyce concluded by stating that the risk of making people angry is “not a reason to stop trying to change hearts and minds.”