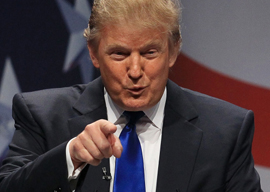 He informed Piers Morgan: “I’m a very good Republican, but I thought Bush was a terrible president. I thought he was a terrible leader….Ultimately he did so badly at the end that we have Obama…a gift from President Bush.” In a March 2007 interview with Wolf Blitzer, Trump called G. W. Bush “probably the worst president in the history of the United States” based largely on the Iraq debacle. In September of the same year, Trump reiterated his opinion and told Blitzer that Bush should go into hiding.

Soon thereafter a smooth-talking, inexperienced mountebank from nowhere came along and got elected president.

I’ve spoken to Trump only once, at the Mar-a-Lago Club in Palm Beach about six years ago. The Donald was sitting in a red Ferrari near the entrance. I gave him a salute and proceeded. He called out, asking if I liked the croquet courts and how they rated against the area’s other courts. I told him that his courts were fine, but not the best in town and there was room for improvement. He seemed stunned for a second.

When I returned the next year, I noticed a qualitative difference, like day from night. The courts were outstanding, the best in town. It’s a small but indicative thing. The Donald had taken care of business.

I’ve encountered Trump’s ex, Ivana, only once, and that was in St. Moritz about ten years ago. Ivana was going skiing by herself. She was fashionably attired. She stood out, even in St. Moritz. A friend and I found ourselves alone with her, locked in a compartment of the funicular going up to the Corviglia. Normally I enjoy listening to English spoken with a foreign accent, but I had never encountered anything like this. Ivana started talking and it was all about herself. She wouldn’t stop. By the time we got to the top, I was ready to scream.

Ivana was the most self-centered person I had ever encountered. I concluded that Donald Trump must be a man of infinite patience, understanding, tolerance, kindness, and bonhomie. Such qualities would be assets in the Oval Office.

Compare Donald Trump to the other presumed individuals in the race. Barack Obama. Newt Gingrich. Sarah Palin. Mitt Romney. Ron Paul. John McCain. Et cetera. Get the picture? With Ron Paul’s notable exception, do we really want more of the same? Trump told CPAC: “I like Ron Paul. I think he is a good guy. But honestly, he has zero chance of getting elected.”

So let me be among the first to say it: Trump for president!