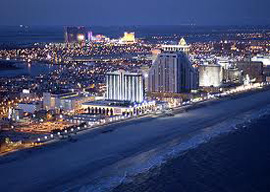 Don’t be fooled by The Donald. Take it from one who knows: I’m a South Jersey gal who was raised on the outskirts of Atlantic City in the looming shadow of Trump’s towers. All through my childhood, casino developers and government bureaucrats joined hands, raised taxes and made dazzling promises of urban renewal. Then we wised up to the eminent-domain thievery championed by our hometown faux free-marketeers.

America, it’s time you wised up to Donald Trump’s property redistribution racket, too.

Trump has been wooing conservative activists for months and flirting with a GOP presidential run—first at the Conservative Political Action Conference in Washington and most recently at a tea party event in South Florida. He touts his business experience, “high aptitude” and “bragadocious” deal-making abilities. But he’s no more a standard-bearer of conservative values, limited government and constitutional principles than the cast of “Jersey Shore.

“Don’t be fooled by The Donald.”

Too many mega-developers like Trump have achieved success by using and abusing the government’s ability to commandeer private property for purported “public use.” Invoking the Fifth Amendment takings clause, real estate moguls, parking garage builders, mall developers and sports palace architects have colluded with elected officials to pull off legalized theft in the name of reducing “blight.” Under eminent domain, the definition of “public purpose” has been stretched like Silly Putty to cover everything from roads and bridges to high-end retail stores, baseball stadiums and casinos.

While casting himself as America’s new constitutional savior, Trump has shown reckless disregard for fundamental private property rights. In the 1990s, he waged a notorious war on elderly homeowner Vera Coking, who owned a little home in Atlantic City that stood in the way of Trump’s manifest land development. The real estate mogul was determined to expand his Trump Plaza and build a limo parking lot—Coking’s private property be damned. The nonprofit Institute for Justice, which successfully saved Coking’s home, explained the confiscatory scheme:

“Unlike most developers, Donald Trump doesn’t have to negotiate with a private owner when he wants to buy a piece of property, because a governmental agency—the Casino Reinvestment Development Authority or CRDA—will get it for him at a fraction of the market value, even if the current owner refuses to sell. Here is how the process works.