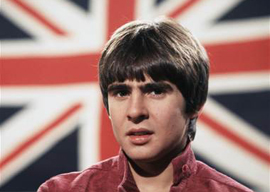 They were completely fake, they were mostly unlovable, other people wrote their songs”and they were still better than The Beatles.

I don”t give The Monkees much thought, but surely one must have a heart of stone to read about the death of lead singer Davy Jones without whistling “Daydream Believer” for the rest of the day.

Jones was one of those funny little musical Anthony Newley/Dudley Moore/Peter Noone fellows that England alone is capable of producing (or was, before the effects of post-rationing nutrition kicked in).

By most accounts, Jones was a likable chap, and the most adorable Monkee by far.

Naturally, every obit noted that Jones and his bandmates were “actors who sing” and “singers who act” (to use venerable casting-call expressions) who”d been hired to portray an imaginary rock group on TV (the better to exploit stateside Beatlemania).

The four stars (over)acted out a California Kodachrome Keystone Kops spin-off of A Hard Day’s Night on the small screen once a week. For two seasons, the Monkees sang Brill Building tunes and mimed playing their instruments to tracks laid down by the finest studio musicians Screen Gems could buy.

The kindest critics figured The Monkees would serve as a musical gateway drug luring kids into “real” music such as Pet Sounds. These voices were outnumbered by cynics who dubbed them the “The Pre-Fab Four.”

Yet in hindsight, the obsession with The Monkees” authenticity or lack thereof seems as selectively wrongheaded as nearly every other bit of received liberal countercultural wisdom.

Did no one think to remind his fellow hipsters at the time that Bob Dylan, the self-styled reincarnation of Woody Guthrie, was really Robert Allen Zimmerman, a Jew from Minnesota?