Down and Out in Laos 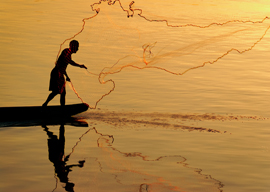 It’s a slow news week and I’m temporarily out of outrageous opinions, so here are my recollections of being down and out in Southeast Asia in 1972. Apologies to George Orwell, with whom I am not attempting to compete. I would not dare.

It took me three months”late June to late September”of pick-up work teaching English in Bangkok to scrape together the airfare back to my base of operations in Hong Kong, where I had friends and where, as a British citizen, I could stay as long as I pleased without permits or visas.

It was a rough three months. At a couple of points in those Bangkok days I was hungry“a thing which, if you ever experience it, you don’t soon forget. I arrived back in Hong Kong looking like “a bag of bones,” according to one sympathetic friend.

It didn’t help that I couldn’t afford the bribe fee (10,000 baht, i.e., $250) for a proper Thai residence permit. All I could afford were one-month visas. At the end of each month I took a ten-hour bus ride up to the border with Laos, got ferried across the Mekong in what I remember as a dugout canoe (though it can’t possibly have been that primitive), hitched a ride into the nation’s capital Vientiane, and went to the Thai embassy to apply for a new one-month Thai visa.

The visa took three or four days to process, during which I”d lodge at the bungalows, a collection of huts a mile or so outside Vientiane occupied mainly by foreign hippies”predominantly Australians”and random ne’er-do-wells such as myself.

“As bohemian as these adventures may sound in the telling, there were limits to how deep I was willing to venture into Bohemia.”

(That haircut notwithstanding, I never considered myself a hippie. I nursed, and still nurse, a strong dislike of hippies and hippiedom. Hippies of the middle, upper-middle, and rich classes were big children unacquainted with any kind of work or responsibility. Low-class hippies were generally rogues, if not psychopaths. Such, at any rate, was my experience.)

With the USAF’s assistance, Laos was earning its title as the most-bombed nation ever. Vientiane itself was not on the target lists. The bombing was going on further east and south to interdict traffic on the Ho Chi Minh trail. I never heard a detonation myself, but the more seasoned bungalow-dwellers used to say that when Xiangkhouang (the next-door province to Vientiane and home to the famous Plain of Jars) was being hammered earlier in the war, you could hear the distant thud of the bombs in still weather.

The main evidence of the war for a visitor to Vientiane was as follows.

(1) The city’s small number of bars and restaurants had a mostly American clientele. These were burly guys in slacks and short-sleeved shirts who would casually tell you over a drink that they were “with the Agency,” i.e., the CIA, probably assuming that any other clean-shaven adult male round-eye was similarly employed. What else would any non-crazy non-hippie be doing in Laos? Laos was an ex-French colony and the restaurants were surprisingly good. The bars had some outrÃ© floor shows.

(2) Occasional units of the Royal Lao Army could be seen drilling shambolically behind chain-link fences or marching on the roads as one walked into the city. The average age of enlisted men looked to be about thirteen, their uniforms comically ill fitting, their stated duty being to defend Laos’s perfectly fictional neutrality.

(3) The bungalows, as well as the aforementioned bars and anywhere else catering to foreigners, were much frequented by young refugee girls.