Down-Low Under the Rainbow?: Jesse Jackson Accused of Gay Harassment 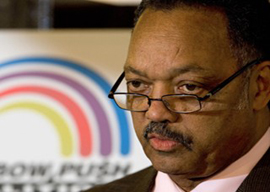 Upon hearing that an openly (and screamingly!) gay black male ex-employee of Rainbow/PUSH had filed a complaint against Jesse Jackson and his organization for discrimination and sexual harassment, questions began popping into my mind as if they were illicit erections in a lonely motel room out near the airport:

Is Jesse Jackson the type of guy who”d fire someone merely for refusing to blow him?

Is his accuser, “Aruba” Tommy Bennett, the sort of fella who”d file a fraudulent discrimination complaint merely for cash and attention, as his famous ex-employer has so often been accused of doing?

Why would someone want to work for a boss who fires you merely for refusing to blow him, anyway?

There’s no denying it””Aruba” Tommy Bennett, a frequent guest on the nationally syndicated Tom Joyner Morning Show, is as gay as a sprig of holly on a winter vest. Bennett’s complaint states that while employed at Rainbow/PUSH (snickers will not be tolerated!), a Ms. Caroline Wiggins, who toiled as a “Membership and Volunteer Coordinator,” taunted Tommy with limp-wrist gestures and once led an open prayer session where she requested that the Lord Jesus Christ “bind these homosexual spirits that are in the office…[and] get these homosexuals out of here.” Bennett claims that when he was fired, the Rainbow/PUSHers told him it was due to lack of funding, but then they hired someone else immediately after dismissing him. His feelings were hurt like any fag’s would be, and for this he seeks $350K, as well as nearly $100K for both front and back pay (stop it!) and lost benefits.

In a formal statement, Jackson and his “people””whom I assume are tinted more like a coffee bean than a rainbow”denied Bennett’s allegations. They made it clear that they love the gays and would never, under any conditions, be mean to them. For legal reasons, I need to mention that before getting back to the fag jokes.