Down with Modernism, up with Mozart 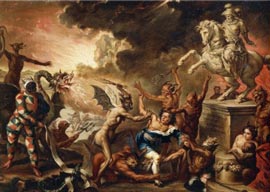 End of season is always bittersweet, the melting snows a bit like autumn leaves, but the days are longer and soon spring will chase any remaining winter blues away. The Eagle Club’s closing is a perennial festive day, with speeches by our president Urs Hodler, an almost teary goodbye to our very own Pino – seating us and feeding us for 44 years – and the Taki Cup awards, the last two years won by my son J.T. in record time. 34 minutes to conquer the highest mountain of Gstaad. (Only five minutes slower was Charlotte Cotton, an amazing feat for a young woman.) It was a hell of a good season, plenty of snow, some fun parties, and my forthcoming move to the top of a mountain and away from the madding crowd. Actually the best I reserved for last, the two greatest operas by the greatest ever, shown in the arts channel and watched by me while downing some very good Haut Brion. I know it sounds impossible, but even a perfect opera like Don Giovanni improves with good red. As does the second greatest, Figaro. As Paul Johnson wrote in his Mozart book, “it is difficult to produce Figaro badly, it is not, alas, impossible, and I believe the Don has been massacred even in Prague.”

“One should repent for one’s sins, but seduction
is no sin, at least not in Mozart’s, Da Ponte’s, nor in my eyes.”

The two versions I watched on the telly were as good as it gets. Teddy Tahu Rhodes is a terrific Don, the Kiwi baritone towering over his rivals, and when he prepares to run through Masetto, or Don Ottavio, it looks terribly uneven. And in the lighthearted Figaro, he amuses and delights. I grew up on Don Giovannis, Cesare Siepi, Franco Corelli, Ruggero Raimondi and so on. Teddy Tahu Rhodes is a heroic Don who doesn’t take himself too seriously. He’s certainly one of the best looking. When Mozart first presented Figaro, he was overwhelmed by the reaction. The emperor even banned excessive applause, so he could hit the sack early. Figaro is a happy opera but the version I saw was a bawdy one. Cherubino is always sticking his hand between Rosina’s legs, and the count strokes Susanna’s breasts at every opportunity. When Don Giovanni first appeared, following Figaro, in 1787, it was felt to be a tragedy, but Wolfie knew what he was doing. It’s an opera buffa that makes a moral point by sending the Don to hell at the end. I’ve always loved the scene, “Repent, No, Repent, No, well then go to hell.” One should repent for one’s sins, but seduction is no sin, at least not in Mozart’s, Da Ponte’s, nor in my eyes. Favorite line by the Don, “If you’re faithful to one, you’re cheating on the rest.”  Here’s Paul Johnson on these two great operas: “Figaro is an essay on happiness and how it may be attained by forgiveness and reconciliation. Giovanni makes a moral point: that wicked behavior must be punished…..” Mozart was a good Catholic, so the Don had to go. Nevertheless I love the Don. Errol Flynn once played him in a lousy film, but the casting was perfect. So, while my Low Life Spectator colleague was listening to the neurotic Mahler’s fifth while having a tooth extracted, I lay on a sofa drinking two bottles of red and hearing the most divine music ever. By the end I was an enchanted wreck.

My problem is modern noise, the cacophony that passes as music nowadays. Untalented and incapable of creating a sound, no less a melody, these creeps rely on a jungle voodoo beat good for Tarzan movies but little else. The lyrics are even worse. Driving with my son down to Lausanne the other day, I asked him how he could listen to the crap he had put on. “I was about to ask you the same thing, dad,” said the little shit. I suppose it’s a matter of age. Anything after Elvis is a no-no to this old boy, and when my boy hears me listening to Fred Astaire he covers his ears and rolls his eyes. Talk about a generation gap. Still, Mozart is a miracle, goes with good wine, or bad, for that matter, and his arias are balanced and dramatic and simply wonderful. All modern classical (atonal) music I find a fraud, an admission of being unable to improve on the past. That goes for literature, painting and all the arts in general. Down with modernism, up with Mozart.

And speaking of great oldies, on April 1st, 200 years ago, the greatest of all German statesmen was born, Otto Leopold von Bismarck, on the family estate at Schönhausen near Berlin. Bismarck’s greatness was based on keeping Russia in, Britain out, and France down. “ He was an honest broker of peace whose system compelled every major power to follow a peaceful course,” according to A.J.P. Taylor. He famously dismissed the Balkans not being worth the life of a single Pomeranian grenadier, only for the great warrior Bill Clinton to bomb Serbia for 73 days in order to establish a Muslim belt in the middle of Europe. Just imagine what Bismarck could have done with the United States, had he been born in Milwaukee. One of his major qualities was his ability to separate major from peripheral interests. Think of him and compare him to today’s clowns and weep. Then put on some Mozart, open the wine, and dream on.