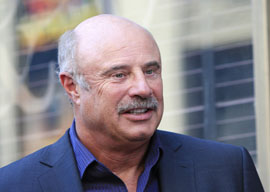 At least early on”before he got caught up in shady stuff such as trying to brand his family as the Osmonds of advice”his folksy football-coach routine was a welcome palate-cleanser during the unicorns & rainbows “inner child” era.

Oprah Winfrey discovered Dr. Phil McGraw when she hired him as a trial consultant during her now forgotten Texas legal beef. Before she gave him his own show, he was a regular “expert” on hers, cranking out refreshingly bullshit-free one-liners.

If a troubled guest tried to excuse an extramarital affair by shrugging, “It just happened,” Dr. Phil would snap, “So you were just walkin’ down the street and your pants fell off?”

He also wasn’t afraid to bite the chubby manicured hand that fed him. During (still) one (more) episode about weight loss, Oprah opined hopefully that maybe, just maybe, some fat women really were “big boned” or had “thyroid problems.” Dr. Phil drawled back, “Yeah, well, that ain’t you.”

For a guy who specializes in helping fix other people’s problems, though, Dr. Phil gets into pretty regular trouble. Last week, however, he outdid himself.

Or rather, his chase producer did. That’s who probably Tweeted out a now-notorious question to the doctor’s million-plus followers on August 20:

If a girl is drunk, is it OK to have sex with her? Reply yes or no to @drphil #teensaccused

The hashtag referred to an upcoming show topic: those high-profile cases of young women allegedly raped at booze-fueled parties, after which explicit photos of the incidents are posted on social media. After one such instance, a Canadian teen named Rehtaeh Parsons took her own life. Her mother was scheduled to appear as Dr. Phil’s guest on that particular episode. (Earlier this month, two 18-year-old men were charged with distributing child pornography in relation to this case.)

Although clearly intended to simply “crowdsource” prevailing attitudes (however politically incorrect) in advance of the program, Dr. Phil’s “drunk sex” Tweet was quickly deleted after sparking an online firestorm.

“Rad-Femme Lawyer” huffed, “You know good and goddamn well that asking when a girl ‘deserves’ to be raped is a destructive question in itself.”

“If a TV Shrink makes my daughter feel guilty b/c she was date raped while drunk, can I punch him in his dick?” one fellow Tweeted in reply.

Consensus rapidly congealed: Dr. Phil’s query had been self-evidently “shocking.” Particularly on the distaff side of the Web, where mythical beasts called “rape culture” and “slut shaming” are cited with alarming regularity, the reaction was predictably hysterical.