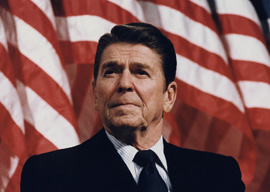 Insufferable sop Piers Morgan is now on a one-man campaign to convince viewers that actor George Clooney would make a marvelous president. Clooney cheekily replies he has “slept with too many women,” a non-denial denial if ever there was one.

It is all too easy to view the “charitable” work done abroad by the likes of Clooney or Jolie and deduce that this justifies them for elective office. It is even easier for these stars to suppose with smug self-assurance that they could handle such a responsibility for a solitary second.

Such celebrities’ efforts are almost uniformly reductio ad absurdum. A problem in Africa? We obviously need to spend more money, since that solution has worked so well for the past half-century. Public education in crisis? Hire teachers, build more schools, and give handouts to charters. Overpopulation the gateway to global disaster? Bring them out of the shadows, bring them to America, and bring me a bucket in which to vomit.

Serious political matters are rarely as simple. Begging for money to aid a momentary crisis will not ultimately address deeply rooted behavioral and social patterns developed over decades or even millennia. It may not even be in our best political interest to solve them. Whatever good deeds humanitarian groups are doing in Darfur comprise nothing more than passing assistance. They have their place, but as charity, not policy.

Whenever such West Coast luminaries appear before a Congressional subcommittee to give testimony, these appearances are not inherently political. They are theater, no less an exhibition than when walking a film premiere’s red carpet. No one in attendance is demanding answers from them; the audience is instead listening with bated breath.

This is the true distinction between stardom and political service—having a voice versus having an ear. A celebrity is responsible to no one, while an elected official is responsible to everyone. The day when George Clooney can remain polite and helpful after being harangued for half an hour by someone so stupid he wonders how the man tied his shoelaces let alone found the office, then he qualifies as a politician—but not a day before. Only after Clooney has been called every deplorable name in the book to his face, and this happens over six months uninterrupted, can he consider himself truly having have been in touch with “the people.” When he has dealt with any problem anywhere at any level of governance which has two equal solutions and both derogatorily impact people yet require decision, then he can count himself as a politician.