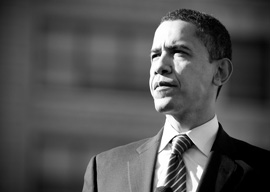 The last thing I had expected of Dinesh D’Souza’s first Michael Moore-type political documentary, 2016: Obama’s America, was that it would prove one of August’s aesthetic marvels. Yet this anti-Obama film’s sumptuous digital cinematography”featuring majestically saturated colors and handheld camerawork that’s never jittery but instead swoops indolently to the edge of trance-induction”ranks it behind only Oliver Stone’s hedonistic drug flick Savages as the psychedelic movie of the summer. (Here’s the trailer.)

But the stylization can get in the way of the message. For instance, D’Souza’s last interview is with a former comptroller general who has comptrollerish stuff to tell us about Obama’s deficits. Sadly, I lost track of his point (We Are Doomed, I imagine) because the camera pirouetted so obsessively and entrancingly around the talking head’s demonically glowing floral necktie that I felt like Ken Kesey in a 1959 CIA experiment.

Kaleidoscopic editing and some cleverly animated maps and diagrams all add to the visual quality. The musical score, unfortunately, isn’t as good. It starts off wonderfully by using Nick Lowe’s insouciant 1979 power-pop hit “Cruel to Be Kind” to explain why Ronald Reagan’s presidency was a success. And there’s some moody Islamic music when D’Souza visits Indonesia, Kenya, and his own homeland of India in search of people who knew the Obama family.

Unfortunately, the score eventually devolves into a TV-quality collection of deliberately unsettling synthesizer blurts. On future documentaries (and with this one already nearing $10 million at the box office, D’Souza should get a chance to make more), D’Souza and his co-director John Sullivan should experiment with using modernist classical music. Nobody does free-floating angst like modern Europeans.

“Obama is reasonably well aware that he can’t bend others to his will face to face, that he’s not a Big Man.”

Aesthetics are crucial to Republicans, since, let’s face it, most partisan politics are status games, and looks are the prime status marker. The GOP has started nominating good-looking candidates. Now they need more good-looking films like this one.

2016 is a less strident version of D’Souza’s 2010 book The Roots of Obama’s Rage, which suffered from a silly title. (Obama’s emotional gamut runs merely from condescension to peevishness.) Still, the veteran conservative author makes a decent biographical case before overextending his argument.

He argues that Obama’s mother taught him to worship his absent Kenyan father’s anticolonial leftism. (After all, Obama named his 1995 autobiography Dreams from My Father.) D’Souza then leaps to the conclusion that Obama’s foreign policy is too dovish, too anti-British, and too anti-Israeli.

The documentary warns that Obama’s congenitally anti-imperialist foreign policy will manifest itself more openly after he’s safely past reelection. It makes good use of the open-mic gaffe where Obama was filmed reassuring Vladimir Putin’s former sock puppet Dmitry Medvedev that on nuclear arms negotiations, “This is my last election. After my election, I have more flexibility.”

Medvedev responded, “I understand. I will transmit this information to Vladimir.” (That’s pretty sinister-sounding in a Boris and Natasha way.)

D’Souza’s book was infinitely denounced and his highly profitable movie has gone almost unreviewed. Yet newly uncovered facts more or less supporting D’Souza’s perspective can be found in the nominally pro-Obama biography, Barack Obama: The Story, by veteran Washington Post reporter David Maraniss. (My book review is on VDARE.com.)