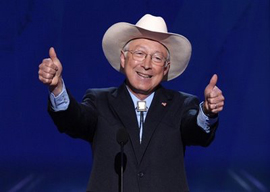 This week, Salazar announced that the administration has just approved the first deepwater oil and gas exploration plan since last spring’s BP/Deepwater Horizon oil spill. Mind you: This is not a granting of permits, but a green light for Shell Offshore to seek drilling permits for three new exploratory wells off the Louisiana coast. Shell first submitted and received approval for its original exploration plan in 1985—26 red tape-wrapped years ago.

Salazar’s make-believe resurrection of American offshore and onshore drilling began a few weeks ago, when the Interior Department Bureau of Ocean Energy Management, Regulation and Enforcement issued a deepwater drilling permit to Noble Energy for a well at the Santiago project about 70 miles off the Louisiana coast. But as Louisiana political analyst and blogger Scott McKay pointed out, “This isn’t a permit for a new project. The permit issued to Noble was for a bypass of an obstruction in a well they’d already drilled before the Deepwater Horizon accident. It took 314 days to get that well back online with this administration.”

Nevertheless, Obama oil czar Michael Bromwich claimed credit for the decision and insisted the project be treated as a new well. So this is how Democrats win the future: crushing industries with one hand while patting themselves on the back for saving them.