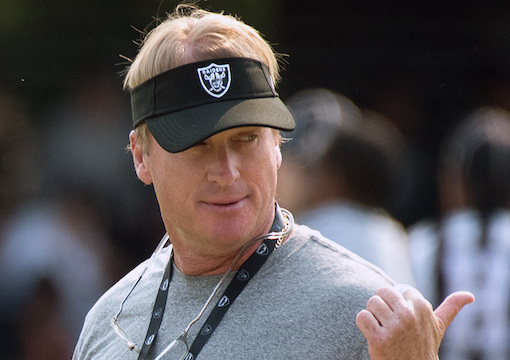 Jon Gruden, an NFL head coach with a $100 million contract from the Las Vegas Raiders, was recently forced to resign after making what the Ebony Times called racist, homophobic, and misogynistic remarks in emails over the past twelve years. Shock horror, pro footballers making misogynistic remarks, why I never heard of such a thing, it’s definitely un-American. Call the midwife, or better yet, the fuzz.

Gruden won a Super Bowl with the Buccaneers in 2002 and then was a commentator for ESPN until hired by Oakland–Las Vegas. In other words, he’d been around forever, was highly respected, and knew the game and the people involved as well as anybody. Now he’s become a nobody overnight because the media and the football commissioner said so. Like in the Soviet of old, a nonperson is one found guilty by a kangaroo court, executed or disappeared by the regime, and never mentioned again. Over here, in the so-called freest country in the world, one does not even get a kangaroo court; he turns into a nonperson overnight once the Ebony Times and the media decide that he or she used the wrong words.

Gruden’s bad words—and I apologize to readers but they’re important to this story—were as follows: Where racism is concerned, he makes fun of a black football executive’s lips as being like tires. Where misogyny is concerned, he calls someone a pussy, and he uses the word “faggot” to describe the NFL’s commissioner (who happens to be straight).

“Gruden, whom I don’t know, will never coach again—unless Albania starts a league.”

Now, I like to think I’m not too racist, not too misogynistic, and not too homophobic, but having spent my life in locker rooms and in competitions, the offending words are more of a joke to me than insults. “Don’t be a pussy” is part of the language, for God’s sake, and in the sport of wrestling—in which I competed for years—a full nelson is called a faggot’s grip. And speaking of fat lips, I can’t think of any boy with a full mouth who wasn’t called liverlips in the all-white, all-boys boarding school I attended.

Mind you, if Her Serene Highness Princess Alexandra Schoenburg-Hartenstein, now plain Mrs. Taki, my wife, used Gruden’s language I might have raised an eyebrow, but in the world of professional sport where motherf—er is used nonstop as a greeting, noun and verb, the coach’s words were almost innocuous. The NFL being a franchise, I am told, can terminate someone if that someone brings the NFL into disrepute. In Gruden’s case, he resigned before being fired by the owner under pressure from the commissioner. The NFL stated that those emails were “wholly contrary to the NFL’s values.”

What I’d like you readers to know is about these particular values. They include selecting ex–Baltimore Raven Ray Lewis to sell NFL merchandise after Lewis pleaded to an obstruction-of-justice charge and reached a settlement with the families of two homicide victims stabbed to death after Lewis’ blood-soaked suit mysteriously disappeared. Furthermore, those NFL values may be contrary to the words used by Gruden, but not to those invited by the NFL to entertain during Super Bowls. N-wording, women-bashing, crotch-grabbing, gun-worshiping rappers abound. Compared with their lyrics, Gruden sounds like a real pussy. (Sorry.)

Commissioner Goodell is as phony as they come. He dares speak about values, but panders to Snoop Dogg—a rapper who has produced pornography with underage girls and praises gun violence—and many others worse than Snoop. But in comparison with Brittney Cooper, a tenured professor of Women’s and Gender Studies at Rutgers University, Goodell is the one who’s a pussy. Cooper is a rather large black woman who recently went on record saying “white people should be taken out.” She has encouraged the murder of white people, yet she claims that she does not believe in violence. For a rapper to spout such nonsense would be too much; for a tenured professor in a large university to do so is more than outrageous, it is criminal. Yet nothing will come of it. Perhaps because she was so articulate when speaking: “The thing I want to say to you is we got to take these motherf—ers out, though I don’t believe in a project of violence. All things that begin with white folks ain’t gonna go on for infinity and infinity.”

Ah, she’s a poet who would make Keats hide in shame were he alive. And America has become a country that makes Uganda feel really democratic. Gruden, whom I don’t know, will never coach again—unless Albania starts a league. He is reportedly considering his options. Good luck. The NFL draft is now compared to a slave auction by failed quarterback Colin Kaepernick, with black athletes in shackles and their white owners whipping them. The analogy helps Kaepernick add to his millions as it is part of a drama series. In fact, “the louder the protest, the richer the protester” seems to be the winning formula for today’s America. Something must be done, and soon, before Netflix and Hollywood and the NFL and Silicon Valley take all of us whites down Swanee.