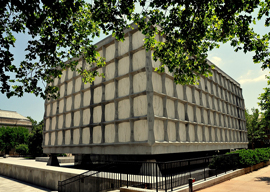 The Beinecke Rare Book and Manuscript Library at Yale University

Are campus leftists getting dumber?

It sure seems that way. For example, a black activist stabbed four students yesterday at the University of Texas, murdering one. That’s just kind of vile and moronic.

The trend is the reverse of a half century ago when the radicals tended to outwit the establishment. Today’s campus left seems brutish and stupid, inclined to butchery and hurt feelings.

Leftism in the 1960s tended to be led from the intellectual top down. For example, during 1967’s long hot summer, the highbrow New York Review of Books put a diagram of how to make a Molotov cocktail on its cover.

Today, however, much of the energy on the left is at outlets such as Teen Vogue and Cosmopolitan.

I”ve been blogging for sixteen years, but I only started noticing Cosmo as a player in political debate last fall when Hillary’s campaign got her supposed secret weapon, the cartelista moll Alicia Machado, a photo spread in the not-so-venerable women’s magazine:

When Hillary Clinton called out her opponent’s sexism at the first presidential debate, she highlighted a woman who had experienced it firsthand.

In an election year full of idiotic gimmicks, Alicia Machado was quite possibly the dumbest of them all.

“Not surprisingly, the kind of thinking that’s trendy on campuses is getting dumber all the time.”

Since then, Cosmo keeps popping up on my radar as being extra woke. For example, its article on the black racist horror movie Get Out was entitled:

If Helen Gurley Brown were alive today, she”d be rolling in her grave.

In the old days, in contrast, Cosmo did not aspire to political relevance. Cosmopolitan magazine has been around in one format or another since 1886, but its Wikipedia outline encapsulates the central event in its history aptly:

Brown was a hillbilly adventuress. Before her father’s untimely death during the Depression plunged her family into hard times, he had been the Arkansas Fish and Game Commissioner.

An expert on sleeping with powerful men, she penned the 1962 best-seller Sex and the Single Girl, before marrying movie producer David Brown in 1959 and becoming editrix in chief of Cosmo in 1965.

Ms. Brown was a force of nature, a sort of Scots-Irish Joan Rivers. Indeed, one time Rivers spotted the penny-pinching Brown juggling suitcases on the way to the airport at a Manhattan bus stop and shouted, “Helen, calm down and take a cab! Your husband made Jaws!”

Brown converted Cosmo into an advice magazine for the secretary who aspired to become a home-wrecker by stealing her boss away from his first wife with, say, the 63 sex positions that always seemed to be headlined on the cover.

It was enormously influential. In 1982 I was riding a Manhattan express subway with an accountant. He said, “As we roar past the next station, notice that all the girls on the platform waiting for the local put their fingers in their ears.”

Sure enough, they did. “They only started doing that last week,” he explained. “It turns out that it’s a tip in the new issue of Cosmopolitan“one of the 42 ways to de-stress is by blocking out subway noise”and they all read Cosmo.”

During the Gurley Brown era, Cosmo and its readers weren”t very interested in politics. They especially weren”t interested in today’s reigning political trope of hating straight white males as the only thing that can unite the Democratic Party’s coalition of the fringes. Cosmo readers traditionally liked men, the straighter the better. In the battle of the sexes, Cosmo subscribers couldn”t be bothered to press on to final victory because they too much enjoyed fraternizing with the enemy.

For all of Cosmo‘s sins, Helen Gurley Brown would not have countenanced its recent descent into Hate Whiteyness.

The magazine’s entry into politicking now seems like part of the Late Obama Age Collapse. Cosmopolitan didn”t start endorsing candidates until 2014, when it backed twelve candidates, all Democrats. Ten of them lost.

That Cosmopolitan now sees itself as a significant player in the public-affairs realm doesn”t mean that Cosmo readers have gotten smarter, just that politics have gotten stupider.

Data blogger the Audacious Epigone recently calculated the dumbing down of the American public.