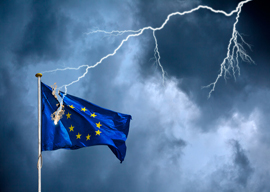 I don’t know who was the dumber of the two: the Greek banker who was in a hurry to spend 100 million big ones for a London pad or the American woman who accidentally walked off a cliff in Alaska while texting.

Bankers laundering money is another matter altogether. Lavrentis Lavrentiadis is an unusual Greek name, although it has not been unusual for Greek officials to cheat on their taxes and purchase grand houses overseas. It’s called laundering money, and the Russians are even better at it than the Greeks and the Chinese combined. London is one big money-laundering machine. It should change its name and simply call itself Laundry.

“London is one big money-laundering machine. It should change its name and simply call itself Laundry.”

The Greek house hunter never made a London purchase in the spring of 2011 because there were so many other crooks ahead of him. Within months the government seized his bank—Proton Bank—which was a bit of theater of the absurd, seeing as government officials of the Greek persuasion are not exactly unknown in London’s real-estate markets.

Lavrenti—not Beria but Lavrentiadis—has denied the accusations of money laundering, which, as a certain hooker of long ago said, “He would, wouldn’t he?” What has emerged from the mess is that the British financial authorities—whatever that means—have handed over a detailed list of about 400 Greeks who have bought and sold London properties since 2009. Whew! Most Greek shipowners (is there any other kind?) I know have had homes in London since the 40s, and even the poor little Greek boy got his first house in London town back in 1971. (I sold my last one in Cadogan Square in 2004 after I looked around me and found only Turks, Arabs, and Russians as my neighbors.) Apparently Greek government officials are closely guarding and examining the list. I say good luck. Catching tax cheats in the birthplace of electrolysis is like finding honest men in Beirut—extremely rare.

Shipowners have owned houses in London since time immemorial. That’s where all the markets were located and where contracts were signed. There were Greek shipowners in London even while Greece did not exist but was under the Ottoman yoke. Many of them, including Manto Mavrogenous, gave away their wealth in the struggle for independence. Miaoulis and Kanaris, two heroes of the revolution, were shipowners first and admirals second. During the last World War, Greek industrialists headed by my father gave away millions to the starving population. Immediately following the war they continually raised funds for the poor. I remember one shipowner refusing to give money at my father’s request and the old man saying to him, “You need it more than the poor do—your feet smell.”