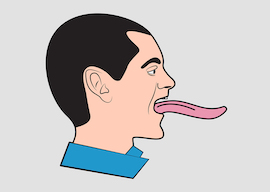 “Dr.” John Glynn is a fascinating monster—an anachronistic throwback to the past and an inevitable product of the present. Glynn is a fraudster, a faker, a cipher who claimed to be a psychologist and university professor in order to dupe journalists into carrying his opinion pieces. He’s anachronistic in that this kind of credential-faking was much more of a “thing” in the days of the print press, when editors reserved their finite amount of op-ed space for credentialed experts. But today, any anonymous turd with a Twitter account can attract ten times the readers of a print op-ed page. Even the most “prestigious” media organs routinely base news articles on the views of “one Twitter user.” Who needs to pretend to be someone they’re not when the unsolicited opinions of anonymous thumbnailers like @BlaqueBae87 or @DoobieDude420 can cause ripples across the political and cultural landscape?

Ah, but that’s why “Dr.” Glynn was able to make his mark. Today’s editors never like to admit the extent to which, in their pursuit of new content and fresh controversies, they’re forced to trawl the filthy waters where the nobodies swim. Glynn offered the hacks a better option: Twitter-quality opinions dressed in the tweed jacket of a respectable academic.

Except Glynn was, in fact, an anonymous nobody. And everyone from science-magazine eggheads to ideologues left and right fell for his deception.

“Professor” John Anthony Glynn claimed to have a doctorate in clinical psychology from the University of Hertfordshire (and he had a diploma to prove it!). He promoted himself as the “head of behavioral science” at Xavier University School of Medicine in Aruba (I don’t even know which way to go with the joke here…X-Men or Natalee Holloway?), which he left in favor of a professor of psychology position at American University of Bahrain. At the same time, he also claimed to be teaching at the Department of Social and Behavioral Sciences at Webster University’s Thailand campus (never trust an underage prostitute who doesn’t have a degree from Webster Thai U).

Aruba, Bahrain, Thailand…besides sounding like a discarded verse from “Kokomo,” it’s also a neat list of faraway places the average editor won’t bother to contact for verification. And indeed, nobody bothered…until now. Somebody finally checked, and not a single thing about the guy is genuine. No professorships, no degrees, no nuthin’.

Speaking of science, one of Glynn’s earliest cons targeted the “skeptic” community. You know those guys, the Mensa members who spend their days proving the nonexistence of Bigfoot. “Professional” skeptics tend to be vehemently anti-right (after all, rightists are Christian climate deniers who believe there are only two genders), and Glynn’s 2016 debut piece for Skeptic demonstrated the dexterity that would end up landing him bylines at dozens of different online and print publications.

Glynn’s Skeptic essay, titled “Guns and Games: The Relationship Between Violent Video Games and Gun Crimes in America,” is the very definition of hackneyed. Glynn regurgitates the work of actual scientists regarding the “cognitive benefits of video gaming” and how “longitudinal studies” prove that video games give kids the necessary “spatial skills” to do well in STEM. He ridicules those who blame video games for real-world violence as superstitious Luddites and Puritans, the descendants of the comic-book and rock-music censors of the 1950s. He squeezes in some charts and graphs, as well as a shout-out to Barack Obama for funding a study that debunked the “blame video games” bugbear. Finally, Glynn closes with a guaranteed audience-pleaser: Blame America’s gun culture! He attacks gun rights advocates, laments the Second Amendment, praises gun-free Great Britain’s “extremely low homicidal rates” (actually, London recently overtook New York City in “homicidal” rates), and slams those who believe that guns are helpful in self-defense, incorrectly asserting that there’s “no substantial evidence” that having a gun in the home “assists in self defense.”

His totally expected conclusion? Increased regulation of firearms will save the day!

For the record, I agree with Glynn that video games don’t cause real-life violence. I’ve just never devoted a column to the topic because I’m bored by low-hanging fruit. But Glynn knew his audience; Bigfoot hunters live on low-hanging fruit (ironically, so do Bigfoots), and Glynn capitalized on his success with the skeptics to launch a truly extraordinary career as a professional opinion journalist. This SOB was prolific. Between February and August 2019 alone, the guy managed to get over three dozen essays published in major news and opinion journals.

Glynn’s fecundity isn’t even his most impressive characteristic. He’s a chameleon. For The Globe and Mail, he decried the oppressiveness of the 9-to-5 job. For left-leaning OZY, he went into nanny-state mode, demanding that parents who let their kids have sugar and fast food suffer “the loss of full parenting rights” and face criminal charges. Then he did a 180 and warned against “Orwellian” statism in MOOT. For The Federalist, he attacked feminists who bray about a “pay gap” in sports; female athletes are simply inferior to their male counterparts, he noted. At American Greatness, he ridiculed CNN. At I Am Hip-Hop, he wrote about “rap vs. hip hop” and “graffiti history.” At Last Word on Sports, he penned soccer parodies. For Psych Central, he pointed out that psychopaths lack empathy. He then took that piece and repurposed it as a “Trump is a psychopath” screed for OZY. He also repackaged his leftist “criminalize bad parental nutrition” diatribe as a rightist anti–“fat acceptance” rant for The American Spectator.

At Areo, he lambasted holistic nutritionists. At the Journal of Nutrition & Food Sciences, he championed holistic nutritionists. At American Thinker, he ridiculed Antifa for denouncing Trump as a “fascist dictator.” At Media Watch (where he claimed to be a “senior lecturer” at Kolej Yayasan UEM, a “premier college situated in Malaysia”), he denounced Trump as a “heinous dictator,” comparing him to Mugabe and Pinochet. Writing for American Spectator, he attacked climate-change alarmism. Writing for the CFI, he attacked those who attack climate-change alarmism. In South China Morning Post, he praised China for its “wisdom, education, and scientific advancement.” In FrontPage Mag, he slammed the Chinese as a bunch of “evil” and “wicked” organ-harvesting murderers.

Glynn was the Zelig of opinion journalism.

“Glynn was the Zelig of opinion journalism.”

If versatility is Glynn’s greatest skill, prose is not. As a writer, he’s strikingly mediocre. On the 40-hour workweek: “It’s not about working harder; it’s about working smarter.” On graffiti: “Since the dawn of time, people have imprinted their names on the walls of caves.” On psychopaths: “Heartlessness is related to an inability to experience important social emotions like love.” On Trump 2020: “The economic climate clearly shapes popular opinion of the president.” On free speech: “As well know [sic], perception is highly subjective.”

Uninspired recapitulation, like most of what passes for journalism online.

How’d Glynn get caught? It was them skeptics done him in. Yep, the very men wot made ’im, offed ’im. Last month, three years after his anti-gun article, several “Skeptics Society” sleuths reviewed his credentials. They’d have done the research earlier, but there was a retarded toddler in Guanajuato who claimed to have seen a chupacabra, and that investigation took priority.

Skeptic magazine publisher Michael Shermer, my old and possibly rapey Donahue Show nemesis, confronted Glynn with the revelation that those who’d examined his supposed credentials found them to be false. Even his vaunted diploma turned out to be a DIY job. Glynn confessed his deception and begged Shermer to keep quiet. But Sept. 4 was a slow day for Mikey Shermer, devoid of UFO or yeti sightings, so he put the word out to the skeptic community, and by the next day, John Glynn essays were vanishing left and right. Shermer himself pulled Glynn’s material from the Skeptic site, because Glynn’s deceitful acts threaten to “pollute intellectual discourse” and “undercut the integrity of journalism.”

What crap. Glynn can’t “pollute” or “undercut the integrity” of the already-polluted, thoroughly dishonest system that created him, a system that rewards mediocrity and unoriginality in the service of catering to amen corners. Every editor and publisher currently deleting Glynn’s work will, if pressed, claim they were deceived. They’ll hide behind Glynn’s faked credentials because they need to preserve the illusion that they have standards beyond “Produce more applause-generating filler.” Take away Glynn’s phony pedigree and you’re left with the fact that these editors greenlit subpar pap that offered nothing beyond bland reiteration.

The humiliated editors, not wanting to face the state of journalism in the age of likes and shares über alles, have no choice but to say, “Hey, we wouldn’t’a published this guy if not for them fancy credentials.” But that’s simply not true. Yes, his CV provided cover that allowed editors to continue to delude themselves about their standards, but funny how those all-important credentials were never all-important enough to verify. Because it was never about the credentials. In the end, the hacks did nothing more than publish the uninventive work of a Twitter nobody. There’s their “standards,” laid bare. They need content, and they need kudos from the choir and the accompanying social media shares. They have very few standards beyond that.

The folks at Areo were honest. They refused to purge Glynn’s work, choosing instead to add a note at the bottom of every essay informing readers that even in the face of Glynn’s falsified credentials, “we accepted his articles on the strength of their arguments which are not dependent on this and so we have chosen not to retract them.” Cheers to Areo for doing the right th—annnnd, they ended up pulling his pieces the next day.

Oh well, at least they tried.

The sentiment expressed in that now-deleted note remains valid. All Glynn did was give editors what they wanted. And now the humiliated dupes are too busy covering their tracks to own a mess that could not have been created without their unwitting assistance.