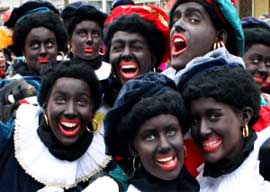 For years now the world has been trying to tell The Netherlands that one of its favorite holiday traditions is an unacceptably racist vestige of colonial bloodletting, but the stubborn Dutch bastards just won”t listen. So now the United Nations has decided to get involved.

Since the mid-1800s, Zwarte Piet (“Black Pete”) has assisted Sinterklaas (a white-bearded white gent transitioning somewhere between St. Nicholas and Santa Claus) in distributing candy and presents to towheaded, rosy-cheeked, and apparently racially impressionable Dutch children on December 5. (A similar ritual is enacted on December 6 in Belgium.) Although referred to in the singular as if it’s only one individual, there are actually countless Black Petes”it sort of works the same way with Bigfoot and “the white man.” Just as there are undoubtedly millions of Bigfeet and white men roaming the planet, the only thing preventing the country from suddenly erupting into a 17-million-strong flash mob of Black Petes would be a shortage of theatrical blackface, red lipstick, Afro wigs, and, if you can swing it, a right fancy Moorish laddie’s costume. Anyone can be Black Pete. You don”t even have to be black. You don”t even have to be named Pete. Dutch Santa usually arrives in public surrounded by a grinning entourage of Black Petes, hardly any of them actually black or named Pete.

Black Pete’s origins are disputed. It’s generally agreed that sometime in the 1500s or 1600s, Europe’s version of the St. Nicholas legend bequeathed a dark personal assistant upon St. Nick. In some cases it appeared to be a demon and in others a Moor, and in many cases no one bothered to ponder whether there’s really a difference. Holland’s Black Pete was first incarnated sometime after the 1845 publication of Sint Nicolaas en zijn Knecht (“Saint Nicholas and his Servant”), and it’s the “servant” part that has given the chronically inflamed Race Police at the United Nations a mean case of diaper rash.

In the annual Dutch tradition, Sinterklass and his merry crew of Zwarte Pieten arrive in November on a boat from Spain brimming with gifts to be gleefully flung at eager Dutch youngsters. Dutch children thus learn at a very young age and in a shamefully insidious manner that black people are prone to smiling and giving you candy.

Yes, sure, whatever, OK, fine, but everyone knows that beneath the seemingly harmless cheap veneer of generosity and kindness roars the ugly, foul-breathed, insatiably murderous head of European colonialism expressed through a shamelessly naked act of cultural appropriation.

As we all know, appropriation is inappropriate.

Even America, that stinking septic tank of ritual racist murder and general all-around mean-spiritedness, has banished blackface (but not whiteface) to beyond the Pale, pun intended. We even got rid of all our Coon Chicken Inns. England exterminated its Golliwoggs. So what the hell is wrong with the Dutch?

Who says there’s anything wrong with them?

The usual suspects, naturally. Sure, the Dutch may be full-throttle prog when it comes to welfare, cannabis, gay marriage, euthanasia, and the whoring industry, but until they assassinate Black Pete, they will remain at least partially unacceptable.

In 2003, the Global African Congress petitioned the Dutch Parliament to euthanize Black Pete. They were ignored. In 2011, a black man wearing a “Black Pete is Racism” shirt was roughed up by Dutch police on video, but just as with the edited version of the Rodney King beating, it starts in media res and so it’s hard to tell who started the altercation. It is said that “many of the country’s prominent thinkers and black celebrities” have called for Black Pete’s death, and a Dutch blogger usually known for irreverence says, “The sooner we get rid of Zwarte Piet, the sooner we won”t look like idiots to the rest of the world.”

Either that, or the sooner you”ll look like the rest of the world’s useful idiots.

Even “the Dutch actor who has been playing the head black Pete for the past 14 years on Dutch television” wrote a recent editorial entitled “Make me less black and less a servant.”

I understand the “servant” part, but isn”t it good to be black? This shit is always so confusing. And is there anything that Black Pete does or symbolizes that is more derogatory toward black people than the very existence of, say, Flavor Flav or Lil Wayne?

When Dutchmen and Dutchwomen say that outsiders shouldn”t meddle with their cultural traditions, they are sternly lectured that they don”t even understand the deeper global meaning of their own cultural traditions and if they make another peep, it will become quickly evident that they are in deep denial about the racism that throbs with reptilian malevolence inside them and that they”re guilty whether they confess or deny, so there’s really no point in denying it. It doesn”t even matter if the racism is invisible or imperceptible or fully subconscious”in fact, that’s the worst kind.

Clearly, The Netherlands” main problem is that it remains 80% Dutch. This needs to be not only addressed, it needs to be atoned for, and the only way to get back at the Dutch for colonizing Suriname and South Africa is to colonize their country with non-Dutch to the point where it isn”t so plainly and egregiously Dutch anymore. That’s how you atone for colonialism”through retributive colonialism in the service of our benevolent and well-intended neo-elites.