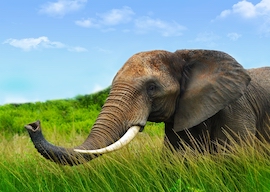 A rare British species, a womanizing ex–foreign minister, kissed and told about his brief affair with a yellow-eyed temptress last week, and it brought back memories of a similar tryst by yours truly. Boris Johnson reclined on a bed of straw with a purring cheetah and lived to write about it without injury, although I am certain there were plenty of Brussels sprouts hoping for a different ending to the affair. Never mind. Boris and the cheetah met at Howletts, the Aspinall wild animal park in Kent, a place I used to know well.

A bit of antebellum lore: If your name is carved on a commemorative column, enjoy it. I am told that mine is on one at Howletts, but perhaps it’s hearsay, as I have not been there since the founder’s death back in the year 2000. Aspers was a close friend, and throughout the years I contributed greatly to the animal welfare via his various casinos. About forty years ago, down in Kent for the weekend, I was challenged by some jerk after I had called him a coward for reasons I no longer remember. He bet me 500 or 1,000 pounds that I wouldn’t spend one minute inside the cage petting the tigers. Aspers coached me and encouraged me to take the bet. He taught me to make a sort of hissing sound that tigers liked and also not to feel nervous inside. The latter I could do easily as I had been taught in martial-arts training. Mind like the moon and all that.

There was, of course, a tragic precedent: Robin Birley. Robin had gone in as a 12-year-old, and the tiger had turned out to be pregnant and grabbed poor Robs by the head, and only Aspinall’s superior physical strength—he pried the beast’s jaws open—saved him. Robin bears the scars to this day, but loves Aspers. Anyway, I went in under the clock, hissed and kept a mind like the moon, and petted the beast, and once a minute was up came out fast and grabbed the man by the throat and demanded the moola. (He paid.)

“Killing an elephant should bring an automatic death penalty to all involved.”

Wild animals are an endangered species, and they are bred safely down in Kent and prepared for the wild. I find no nobler cause than that, and as I get older I tend to agree with John Aspinall, who said to Simon Fraser (Lord Lovat) in my presence when a wounded buffalo had killed the shooter, Simon’s younger brother Andrew, “Sorry, Simon, but when it comes to animals versus man, I always take the side of the former.”

While do-gooders and other phonies worry about the human species, we have gone from almost 2 billion when I was born to 7 billion by the time I leave this earth. In the meantime, among the innocent ones, we have lost 500 species, and lions, tigers, polar bears, and elephants are near extinction. We argue endlessly about some ugly horror woman called Begum and whether she should be allowed to return to some dump in the East End, while beautiful elephants are shot so some Chinese tart can wear ivory.

I find it very hard to swallow that Chinese gangsters are behind the killing of elephants for profit and we stand by bowing and scraping to them. Killing an elephant should bring an automatic death penalty to all involved. Tanzania is down to 43,000 of the pachyderms thanks to our East Asian friends, Vietnam included. And speaking of horror people, my old friend Imran Khan did not exactly cover himself with glory last week.

Thirty-five hundred pigeons released, a 21-gun salute and fighter-jet escort, and Pakistan’s highest award, plus a gold-plated assault rifle, all given to a fat coward who has killed innocent children in Yemen nonstop via the manly art of starvation; step forward, Mohammad Bone Saw, Saudi strongman and coward par excellence. Mind you, Pakistan is in dire need of Saudi money to ward off an economic crisis, the trouble being that what Saudis pledge and what they do are two very different matters. Saudi Arabia imports poor Pakistani workers and then refuses to pay them. Once the laborers complain, they are jailed—and in return for future lucre, Pakistan says nothing. And as he’s hailed a hero, the cowardly Mohammad Bone Saw is releasing 2,000 Pakistani prisoners in Saudi jails, most of whom are totally innocent, jailed for claiming their wages.

Imran once told me there was no al-Qaeda terror organization, it was a figment of the CIA. If he was suspicious of the Americans, I wonder what he really thinks of the Saudis. Perhaps he should ask the underpaid Sudanese mercenaries the Saudis are using in Yemen. Saudis are too cowardly to actually engage in combat, but they shoot the innocents from above. Rolling out the red carpet for such a monster is a golden duck for Imran. Even Amazon, the greediest company since Facebook, and its führer, the matinee idol Jeff Bezos, have pulled out of Saudi because of the country’s murderous habits. Bezos says it’s because Khashoggi wrote for his newspaper. I don’t believe a word. The Saudis were behind the leaks about Bezos’ love life, or so the bald Errol Flynn has been told. A pox on all their houses, and they’ve got plenty of them.