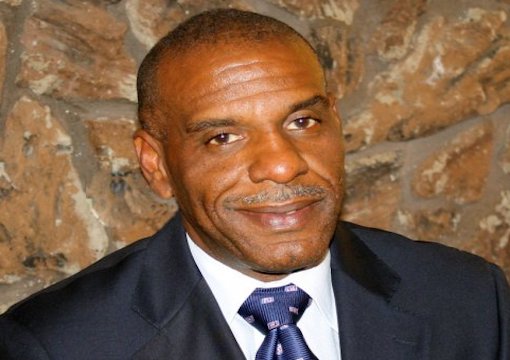 Bradford so black, every time he visits Long Beach port, the vessels get sickle cell.

As a legislator, he’s single-mindedly focused on California’s dwindling black minority (roughly 5.5% of the population). For example, Bradford’s the prime mover-and-shaker behind California’s slavery reparations scheme, and he’s the guy who fought to make sure no money goes to Spanish-speaking blacks ’cuz they wuzn’t Dixie slaves (them dollas be fo’ Kunta Kintes, not puta pinches).

Why? Simple. When incident reporting is nondiscretionary, black kids are reported in disproportionate numbers. Make reporting discretionary, and admins will be monitored to ensure that they’re not reporting “too many” black kids. SB1273 is a way to cow schools into keeping mum when black kids act up. Bradford’s flack Nital Patel admitted as much to me last week, explaining that the point of the bill is to give administrators discretion so that “black” and “POC” students aren’t “disproportionately referred to law enforcement.”

Bad timing for a bill that lets schools cover up violent threats.

The bill still passed (Sacramento is one-party rule), but nine of 29 Democrats refused to vote yes. That’s almost a third. Since the vote, I haven’t been able to get a single Dem senator to defend the bill on the record.

When I asked Senator John Laird (CA Senate District 17—57% white, 2.3% black) to defend 1273, which he voted for, his policy director Samantha Samuelsen told me that her boss would have no comment, and I should ask Senator Sydney Kamlager instead; she’s the one who should defend the bill.

Kamlager’s the only black woman in the Senate. So basically, Laird’s office responded to my inquiry with, “Go talk to the black chick. Let her defend the damn thing” (in fact, I’d already reached out to Kamlager, who refused comment. As she’s currently running for Congress, that’s no surprise).

I also reached out to L.A.’s new school superintendent Alberto Carvalho (Portuguese, raised in Florida). Carvalho, who presides over a distrito that’s 74% Hispanic and only 7% black, instituted several commonsense school safety measures after Uvalde, including the much-hated (by leftists) “single point of entry” thing, as well as “increased collaboration and information sharing” with law enforcement.

Carvalho’s comms director Shannon Haber would only tell me that “Los Angeles Unified has not taken a position on this Bill.”

It’s hard to find anyone but Bradford who’ll speak for SB1273. And as his bill noire heads to the Assembly, let’s look at another educational “advancement” he initiated.

The BSAP is due to go into effect this fall, meaning that over the summer LAUSD needs to figure out what’s gonna be in it. I could joke that the entire program will consist of nothing more than repeatedly saying to black students, “You’re geniuses,” but only a lazy comic would try to pass off reality as a joke.

Because yeah, that’s the actual program.

Recently released fliers for BSAP planning seminars (June 13–17) reveal that the curriculum, titled “Black Excellence Undenied,” will be based on the work of Dr. Gholdy Muhammad, College of Education & Human Development, GSU.

Gholdy’s all the rage in K–12 right now. Her course materials are being integrated into schools across the country, so let’s take a moment to get to know her unique approach to public ed.

Whereas other CRT fanatics say, “This-or-that type of teaching is racist,” Gholdy says, “Teaching itself is racist.”

Her model is based on her belief that black children are “enough and genius,” and the job of a teacher is simply to tell black kids “you are enough” and “you are genius.” Black children should find “entitlement in their excellence”; therefore, their teachers must “make it impossible for them to fail.”

Gholdy forbids any measurement of learning. No “tests or assessments.” Black genius simply exists; to seek to gauge it, to ask a black person to prove it, is an act of racism. Black genius is stifled when it’s denied, but it’s also stifled when it’s asked to show itself. Like the famous cat in the box, trying to observe it, kills it.

Gholdy wants it to be the standard model for every child of every race and ethnicity:

Why should we use Blackness as THE model for getting it right with all kids? I say, why not? Blackness is beautiful. Blackness is excellent. No one has had our history of joy, oppression and thriving. We are a loving people with genius minds and beautiful hearts. Black historical excellence gives us all a model for teaching and learning that will benefit us all. Not just some or a few. Why SHOULDN’T Blackness and Black education be a model for all today? Why would we keep all that is excellent for ourselves. We are not a selfish people.

Gholdy wants nonblack kids taught black superiority K–12, so that these nonblack kids grow up taking such superiority as a given (thus there’s no need to ever see proof of it), while no longer learning basic educational skills themselves, thus leveling the field and erasing, finally, black/nonblack achievement gaps.

Gholdy’s lesson plans include “sing a freedom song” (sing a song that symbolizes “black liberation”), “talk about your name” (why your name is unique), and “tell me why you’re brilliant” (explain how “black genius” lives inside you).

This is about to become the standard in the second-largest school district in America. We’ll see how that works out. L.A.’s Mexican parents rebelled when their kids were forced into English-only classes; they saw that as an insult to their “noble” Hispanic heritage. Just wait till the Mexican kids are forced into “blackness-only” classes. That’ll put the muy in the malo.

Mexican parents aren’t going to be terribly happy when they see their children’s homework: “List ten reasons blacks are more brilliant than you.” Some white and Asian parents might not be happy either, but they’ll suffer in silence. Mexican parents will be vocal, and L.A. politicians will listen.

This is kamikaze stuff. Senator Bradford forcing through a reckless bill (that even his colleagues won’t publicly defend) that risks the safety of every kid in California just because he doesn’t want the most irredeemably violent black students to face disciplinary action, and Gholdy Muhammad seeking to rob all L.A. children of skill-based education in order to make it “impossible” for the dumbest black kids to fail.

This is blacks being a liability to those around them. It’s a flawed business model in general, as it engenders hostility from every other demographic. But in a place like L.A., where blacks are on the way out, it’s just damn suicidal, a way for a shrinking and increasingly isolated minority to become ever more unpopular.

If you’re going to mandate the teaching of your race’s superiority, you better be fully in control, either numerically (when the Nazis made Aryan superiority the model for all German schools, Jews, at only 0.75% of the population, had no choice but to take it) or via force and technological superiority (i.e., whites during apartheid South Africa’s prime).

Blacks in L.A., being neither numerous nor essential, are simply not in a position to make black supremacy the standard educational model.

The strategy that Gholdy and Bradford advocate, which can be defined as “save every black,” is the absolute worst path for a shrinking (in California) and stagnating (nationally) American-born black population. They’ll never have the quantity (Mexicans displace them daily), so whittling for quality is the only intelligent way forward. Gholdy and Bradford advocate the opposite strategy: Don’t expel the most violent black kids; they’re “our babies,” so let them run wild, terrorizing high-achieving black students (L.A. schools are heavily segregated, so black students tend to be the main victims of black miscreants). Don’t fail the lowest-IQ black students; rather, reengineer the standards so that the dumbest become the geniuses, even if it means black students with genuine academic potential are robbed of a viable education.

Gholdy believes that by replacing (what she sees as) white supremacy education with black supremacy education, she can replicate in blacks historical white successes. Black supremacists have long excused their actions by saying, “We’re just doing the black version of what white folks do” (i.e., Farrakhan’s defense of Malcolm X’s murder: “Whites kill their Benedict Arnolds, so we do the same”). Gholdy and Bradford advocate “save every black” because they think they’re mirroring historical white supremacy. But in fact, even when white supremacy was the dominant Western worldview, intraracial “whittling” was still seen as important. Academic standards weren’t lowered for the dullards and lawbreaking wasn’t tolerated for the delinquents. Never forget that one-third of all American lynchings from 1883 to 1941 were white-on-white; a majority of all frontier lynchings were white-on-white. White Steven Bradfords didn’t coddle white incorrigibles if those incorrigibles were harming other whites.

Indeed, it was white openness to “whittling” that ushered in 20th-century eugenics, which promised to cull the dullards permanently (forget the pro-life fabrications; Margaret Sanger’s “extirpate human weeds” remarks referred not to blacks or Jews but to intraracial hygiene).

These are details blacks miss when they try to ape white supremacy.

Black supremacists may think their skin alone makes them “enough and genius,” but as blacks increasingly become a liability to those around them, their neighbors are increasingly likely to declare that they’ve had enough of those “geniuses.”