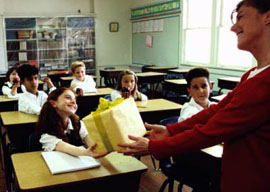 It’s a tough call. One recent example of the WE KNOW WHAT’s BEST FOR YOUR CHILDREN brigade overexerting itself involves a report on UK schools that are attempting to enforce a ban on best friends. In UK newspaper The Sun, educational psychologist Gaynor Sbuttoni noted an increasingly common policy used in several UK regions whereby “teachers tell children they shouldn”t have a best friend and that everyone should play together.” Apparently schools in Surrey, Kingston, London, and other regions of the damp “n” dreary isle are attempting to make it official school policy that children only play in large groups and thereby avoid the distastefully intimate and counterrevolutionary scourge known as “exclusive friendship.”

Some have argued that the rationale is to reduce bullying in schools, while others have claimed that schools merely want to “save the child the pain of splitting up from their best friend.”

I guess it’s never too soon to wean children from outdated concepts such as “freedom of association.” Besides, the next generation of English toddlers has a lot of work to do if they want to keep up the fine English traditions of rioting, looting, burning down businesses, and destroying public property”all of which are performed with greater efficiency by large groups than by individuals. (Ever try to set fire to a police car and loot an entire shop’s worth of plasma-screen TVs with only your best mate for backup? You totally need a bigger group to do it.)

Does anyone actually believe that bullying can be prevented by enforcing friendship as a group activity? Anyone with an ounce of sense”i.e., anybody with enough sense to land a better job than “preschool educator””knows that bullying is fed by precisely the sort of herd-mentality conformity that forcing kids to play in large groups would facilitate. Bullies usually have the larger group’s approval. Having a best friend can actually be the best shield against bullies”sometimes all it takes is one kindred spirit to give someone the confidence to stand up to bullying.

As for the equally inane argument that children must be protected from the pain of a friendship coming to an end”kids, losing a friend is the least of the problems this life will throw at you. Family members will pass away and loved ones will die; you”ll be fired from jobs and likely embroiled in an acrimonious divorce by the time you”re thirty. Falling out with your fifth-grade best pal over who gets the bigger piece of a Snickers bar will hardly be the harshest thing life throws at you. Better to learn early that life will be one long litany of disappointment than enter the adult world with any illusions.