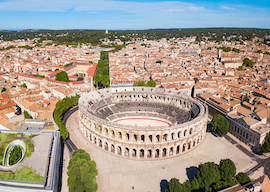 On a recent train journey from Paris to Nîmes, which took about three hours, I was unfortunate enough to sit across from a real plouc. Plouc is a wonderfully expressive word in French, almost onomatopoeic, for a nincompoop of a certain kind, an unsophisticated provincial bore, not malicious but rather stupid.

The man had the face of one of those birds of lesser intellect, a pheasant, perhaps, or a quail. Unfortunately, he talked the whole way, not letting up for an instant. (The French generally behave very well on trains, much better than, say, the Dutch.) His every thought was banal; it was clear that nothing interesting—interesting to others, I mean—had ever crossed his mind. His sole concern was with the day-to-day flux of his not-very-interesting life. If he had observed Armageddon he would have remarked that it would take a lot of time to clear up afterward.

I don’t think I could speak for three hours without interruption, not even if I thereby emptied my mind of its entire contents; there would be pauses for thought as to what to say next. Certainly, I wouldn’t like to try, but he did it with ease. I thought of what Sydney Smith said of Macaulay: “He has occasional flashes of silence that make his conversation perfectly delightful.”

Despite my irritation—I was trying to read an intellectual volume—I could not help feeling sorry for the plouc. But of course, I need not have done so; a real plouc doesn’t know that that is what he is and therefore does not suffer from his ploucdom or ploucness. It is others who suffer.

A far worse condition is that of being a semi-plouc. I sometimes suspect that that is what I am. A semi-plouc is never quite sure that he is not a plouc and therefore suffers agonies. Is what he says boring others? My wife kicks me under the table when she thinks that I am, when she thinks I am going on too long about my obsession of the moment, whereupon a real, 100 percent plouc would ask, “Why are you kicking me under the table?” I am not quite that bad.

“I have no particular animus against French architects—they are only very slightly worse than their counterparts elsewhere.”

Anyway, I survived the journey. The plouc went on his way and I went on mine.

Nîmes is a beautiful city, of course, famed for one of the most perfectly preserved Roman buildings in the world, the Maison Carré, and a splendid amphitheater that is currently undergoing cleaning and that can still be used (unlike, for example, the stadiums built in Brazil a few years ago for the football World Cup). The centre of Nîmes is also elegant and graceful.

Unfortunately, the late-20th-century contribution to the city is rather less distinguished, though not without a certain interest for those fascinated by the degradation of Western civilization. I recommend a visit to what is called the Ville active (as if the rest of the city were dormant, a kind of Pompeii or Angkor Wat) to understand the vision of what arrogant but pinheaded French architects evidently think is a utopia. Incidentally, I have no particular animus against French architects—they are only very slightly worse than their counterparts elsewhere.)

Not included among the activities of the Ville active is walking. This is for two reasons. First, it is boiling hot, and the designers of the Ville did not think to provide pedestrians, if any, with shade. The result is that the Ville is like a griddle on which one might fry eggs. If Noel Coward were alive today, he might write that “Mad dogs and Englishmen/Go out in the Ville active.”

The second reason no one walks in the Ville active is that the architects have rigorously excluded any manifestation of the street as an institution. The founders of their school of architecture, still revered like the Church doctors, hated the street, with its shops, pedestrians, hawkers, and the like; they thought it messed up their designs for a world without spontaneity. They much preferred people to go everywhere by car, and now, of course, they do.

The type of restaurant that you find in the Ville active is, of course, quite without character. There is, for example, a giant restaurant asiatique (note the absence of any reference to any particular part of Asia), which is actually a giant canteen in a warehouse atmosphere, where people who have summoned up the energy to drive to its car park eat as much of the food, mostly fried several days before, as they like, or are able to.

As for the buildings, they could be anywhere, from Paraguay to the Philippines. They have about as much local color as a bottle of Nescafé. If you can imagine miles and miles of terminuses of small provincial airports, you have imagined the Ville active of Nîmes. Only someone with a severe case of Asperger’s syndrome could feel any attraction to the place. Acres of plate glass—just the thing for a semi-tropical sun to shine through—reminded me of a patient with Asperger’s who found the meaning of life in collecting light bulbs, of which he had many thousands and which he protected with his life.

Is it not amazing that such a monstrously inhuman environment, a kind of minor Brasilia, should be constructed within a few hundred yards of so pleasant and elegant a city? It is not a question of money, because the architects would build nothing better whatever the budgets they were given. Indeed, if anything, more money would allow them flights of their lack of imagination. In fact there are worse buildings than those in the Ville active, and they could probably build them if given the chance.

Architects now specialize, whether knowingly or unknowingly, not only in destroying but in preventing any sense of place or the development of affection toward anywhere in particular. When they don’t entirely succeed it is not for lack of trying.

I began to think affectionately of my plouc as I drove round the Ville active. There are far worse things to be than a plouc—a French (or British) architect, for example.