Easy to Put Down 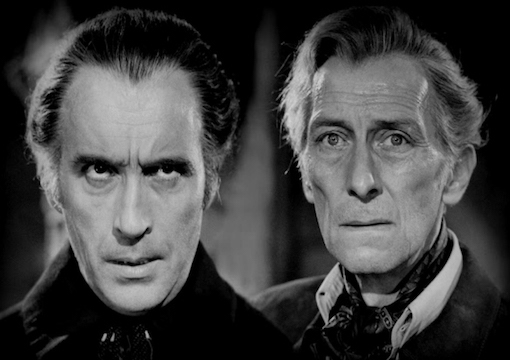 Patricia MacCormack is a professor of continental philosophy at Anglia Ruskin University in Cambridge, England, which has nearly 40,000 students. If the photographs and videos of her to be found on the internet are truly of her, she looks as if she had strayed from the set of a cheap horror movie, or perhaps from the set of a spoof of a cheap horror movie. These days the real thing is difficult to distinguish from spoof.

Not that I have anything against cheap horror movies—in their place. When I was a student, I used to love the Dracula films in which Christopher Lee played Dracula and Peter Cushing Professor Van Helsing (of Amsterdam). I laughed at the absurdity of a corpse rising through the earth of a cemetery to become of one of the undead, but in reality I felt a frisson of fear. I laughed more genuinely when I noticed that the bats that entered bedrooms in Transylvanian castles to transform themselves into vampires were suspended on fine threads as they flew about, squeaking. My friends and I used a catchphrase from these films to express mock disapproval or fear: “What, in Transylvania in the 19th century!” we would exclaim. “When shall we be free of this evil?”

But to return to England in the 21st century. Professor MacCormack’s main idea seems to be that the only way to save the planet from destruction is for humanity not to reproduce itself and thereby to die out within a generation or two. She wants to make the world safe for the worms and the wasps, though her scheme would be hard luck on those species that parasitize only Man. They would have to die out too. But, as the Reverend Charles Caleb Colton put it in 1821, “Let no man presume to think that he can devise any plan of extensive good, unalloyed with evil.” If Man dies out, so too will Wuchereria bancrofti, one of the filarial parasites that cause elephantiasis, along with other such species, but I suppose that this is but a small price to pay for the immense benefit overall wrought by the extinction of Mankind.

“The book is so badly written that it would be almost invidious to choose to quote one passage rather than another.”

Naturally, I sent for her latest book, The Ahuman Manifesto: Activism for the End of the Anthropocene. Thanks to the epidemic all the libraries were shut, though in other respects the virus’ efforts to end the Anthropocene were, from the professor’s rather special point of view, feeble or pathetic, with only 2,000,000 deaths so far and 6,998,000,000 to go. If I wanted to read the book, I would have to buy it.

I am an obsessional reader; that is to say, when I start a book I feel obliged to read it through from cover to cover. Moreover, I would rather read anything than nothing at all. Once in Los Angeles I was stuck in a hotel bedroom with nothing to read but the yellow pages (there were still telephone directories in those days), from which I learned a humiliating lesson. Books have long been at the center of my life, but I discovered how unimportant they are in the lives of most people. There was about half a page devoted in the yellow pages to bookshops, but scores to private detectives. No wonder Philip Marlowe chose Los Angeles as his place of work.

But Professor MacCormack’s book defeated me, not only sapping my will to read further but inducing a state almost of catatonia. It certainly cured me, at least temporarily, of my obsessional desire to finish any book that I have started. Her style made The Critique of Pure Reason seem as light and witty as The Importance of Being Earnest. She appears to think that the English plural of manifesto is manifesti rather than manifestos; I admit that it conjured up in my mind a new Italian dish, gnocchi manifesti.

Open the book at any page and you will find passages that startle by their polysyllabic meaninglessness combined with the utmost crudity. By chance, I opened the book to page 144 and my eye fell on the following:

The multiplicity of becoming-cunt as an assemblage reassembles the tensors upon which it expresses force and by which force is expressed upon its various planes and dimensions.

I have known deteriorated schizophrenic patients to speak more sensibly and coherently than this.

The book is so badly written that it would be almost invidious to choose to quote one passage rather than another. As the poet Gerard Manley Hopkins put it in another context, “No worst, there is none.” In Professor MacCormack’s book, everything is worst. I choose at random:

The negative value of the end of anthropocentrism is where the jubilance of the world begins. The everything else that comes at the end of these systems is primarily only really the end of the primacy of one isomorphic functioning mode of knowledge. Difference and proliferation which seethes beneath in a germinal state has the capacity to express when the anthropocentric mode is diminished to one of many ways, historical or majoritarian-hysterical.

There are nearly 200 pages of this stuff, which the publisher describes—as far as I can tell without irony—as embracing “concepts like human extinction, vegan abolition, theist occultism, death studies, a refusal of identity politics, deep ecology and the apocalypse as an optimistic beginning.” All that is missing, it seems, is a broomstick.

That someone—perhaps many people—can make a career of this kind of drivel (largely, I suspect, at public expense) is testimony either to our confidence in the strength and solidity of our civilization, such that it can withstand almost any assault on its values or degree of corruption of its youth, or alternatively that we are approaching a final state of moral, cultural, and intellectual disintegration and collapse that must before long lead to its replacement by another, less frivolous, but not necessarily better, dispensation.

Does one ignore, mock, or criticize figures such as the professor of continental philosophy? (Her book, by the way, which is by no means cheap, is in its third printing.) The problem seems to be that cultural entropy is now inexorable. My only consolation is that people have been saying this for decades, if not for millennia.