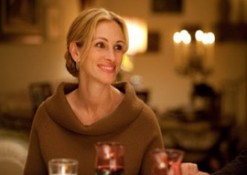 Four decades into the feminist era, the number one movie at the box office is Sylvester Stallone’s The Expendables, in which Eighties action heroes blow stuff up. Right behind is Julia Roberts” Eat, Pray, Love, in which a divorcÃ©e expensively feels sorry for herself in Italy, India, and Indonesia. (Iowa, Indiana, and Idaho presumably being all booked up.)

I don”t think it’s too scandalous in 2010 to point out that these films are aimed at disparate audiences. Today, in fact, it’s hard to remember how nervous such observations made the bien-pensant as recently as the early 1990s, in the wake of the Anita Hill-Clarence Thomas brouhaha. Back then, it was almost mandatory to add after any subversive notice of sex differences, “But, of course, that’s all due to dressing baby boys in blue and baby girls in pink; if it weren”t for society, everybody would like the same things.”

When depressed about the intellectual flaccidity of the 21st Century, I cheer myself up by noting that nobody wholly subscribes to feminist orthodoxy anymore. Most people can now admit that social conditioning isn’t what differentiates the sexes; instead, it’s the only hope of their ever getting along civilly. When allowed to indulge their inner fantasies, however, as incarnated in movies such as The Expendables and Eat, Pray, Love, the sexes barely seem to inhabit the same planet.

“Perhaps by the second sequel, digital reanimation of actors will have progressed enough that Julia Roberts can be wooed and won by a revivified Cary Grant?”

Eat, Pray, Love embodies Oprahlosophy so cunningly that I might suspect it of being another hoax, like Oprah’s earlier autobiographical fave, A Million Little Pieces. Yet, trying to discern which events Gilbert might have concocted is pointless, because there are practically no events in the movie. Julia Roberts merely alternates between looking radiant and looking gaunt.

When her handsome but underachieving husband (played by Billy Crudup, the rock star in Almost Famous) admits he doesn”t want to go to Aruba with her on her latest travel writing junket, she announces that she wants a divorce, breaking his heart. After some counseling from her best friend (Viola Davis of Doubt, who almost succeeds in lending dignity to the role of Liz’s own personal Oprah), she rebounds into the arms of a handsome actor (James Franco of Pineapple Express), who is playing her husband in the (quite bad) Off-Broadway play Liz wrote about herself.

Liz then decides, however, to dump her ardent new boyfriend and spend a year in the three aforementioned I-Countries (because, to Liz, it’s all about me). She moves to Rome, where she eats enough pasta to blimp up from a size -2 to a -1. She then decamps to an ashram in India to meditate for four months. There, she has deep conversations with a folksy Texan (Richard Jenkins, Oscar-nominated for last year’s The Visitor).

Finally, she’s off to beautiful Bali, where she meets a sentimental Brazilian (Javier Bardem, now with a better haircut than in No Country for Old Men). I”ve always wondered why Bali is so much more popular with tourists than the rest of Indonesia. It turns out that Bali’s graceful culture stems from when the Hindu elites of neighboring Java fled Muslim conquest, making Bali the only Hindu island in a mostly Muslim archipelago. I found that out from Wikipedia, however, not from the movie, which didn”t, God forbid, have time to impart any such information because it needed all 133 minutes for Liz’s journey of self-discovery.

At this point, a couple of hours in, some dramatic tension finally arises: Since Crudup, Franco, and Jenkins weren”t good enough for her, will Bardem finally suffice? Or will Liz hold out for a sequel in which she’s courted by Pitt and DiCaprio? Perhaps by the second sequel, digital reanimation of actors will have progressed enough that she can be wooed and won by a revivified Cary Grant?

The glossy lifestyles portrayed in chick flicks always raise the question, “How can she afford that?” Yet, money goes unmentioned as unromantic. That reminds me of the 1970s when I was repeatedly told that free agency would make pro sports unpopular by exposing tawdry fiscal matters. Money talk, though, just made pro sports even more popular.

In my experience, women are extremely interested in how much things cost. I suspect that, just as men like talking about LeBron James” contract, women would enjoy a romance movie that dishes on how much the heroine is shelling out.

Maybe the sexes aren”t so different after all?