Electing Not to Vote 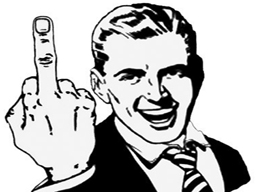 A legendarily brief standup performance by Seinfeld creator Larry David consisted of the eternally uneasy comedian walking onstage, slowly scrutinizing his audience, shaking his head, and saying, “No, I don”t think so” before abruptly leaving.

That was similar to my voting experience in 2008.

Like a nervous white shark, I circled my local polling station in DeKalb County, GA. Voters poured out of the red-brick grade school and wormed down the sidewalk for hundreds of yards. Georgia is about two-thirds white and leans Republican, so the balled-up-and-crusty used facial tissue named John McCain already had the state in his pocket. But DeKalb County is solidly black-Demo and has consistently elected race-hustling convicted reverse-discriminators such as Vernon Jones, Islamically funded and possibly insane commie vampire bats such as Cynthia McKinney, and intellectually handicapped Hep-C sufferers such as Hank Johnson. Being mathematically minded, I concluded that there was no chance my vote would have the slightest effect on the national, state, or local elections. So after scrutinizing the audience, I said, “No, I don”t think so,” and drove away.

I haven”t had much luck with voting. I’ve cast a ballot in five presidential elections but never picked a winner. To my knowledge, the only item for which I”ve ever successfully yanked the one-armed bandit was California’s Proposition 103 in 1988. That measure was intended to roll back state insurance rates by twenty percent, but vengeful lawmakers found a way to slalom around vox populi, and my insurance rates soon doubled.

The main problem”and it’s enormous”is that while voting is voluntary, taxation is not. I don”t quite deem it an honor being “allowed” to choose who gets to steal the fruits of my labor.

In short, although I am reputedly a sandal-wearing member of an Athenian-style democracy and am thus a vibrant, throbbing, membrane-coated cell inhabiting the body politic, I”ve had zero say in how the government spends the money it’s been sucking from my veins since I entered our labor force as a humble, innocent buck in my mid-teens. Without so much as a mouth-fart of my consent, the government has stolen my lunch money for my entire life.

A predictable contingent of people, schooled in the sort of cheap slogans that ultimately get politicians elected, will chastise me for abandoning my civic duty and lecture me that if I don”t vote, I have no right to complain. What exactly is this “right to complain” of which you speak? What’s it worth if politicians aren”t required to listen to you, anyway?

Some might try to nudge me to at least vote for the lesser of two evils. I”m no stranger to evil, and like Christine O”Donnell, I may or may not have dabbled in witchcraft at some distant point in my youth, but I refuse to vote for any sort of evil, greater or lesser, that’s going to have power over my life. That doesn”t seem, I don”t know, very democratic to me.

American democracy’s pom-pom girls will dust off another bumper sticker and insist that every vote counts. That’s a cute idea, but according to one study of approximately sixteen thousand congressional elections, only one”in Buffalo a hundred years ago”was decided by a single vote. A person’s odds of casting the deciding vote in a presidential election is estimated to be around one in sixty million”about the same chance you have of being struck by lightning…twice.

Whether dimly or vividly aware that the odds are stacked against them, many eligible voters”sometimes a majority”vote not to vote. I get a creeping sense that many Americans take this route due to a learned helplessness accrued after decades of realizing that no matter how they vote, no one is listening to them.

Refusing to vote is one thing. Refusing to cooperate with the system whatsoever is the potentially dangerous next step.

American democracy might be more workable if “We the People” still had any sense of nationhood or common destiny. This “nation” is currently held together by spit and bubble gum, our only social adhesive being a strict demand that we celebrate that the only thing we have in common is the fact that we have nothing in common. Political debate is reduced to a shouting match between classes, tribes, and genders regarding who gets to eat which slice of the pie at whose expense.

There were fewer than four million Americans when the first US Census was tallied in 1790. There are now nearly 80 times as many masses huddling here. Each member of the House of Representatives is expected to adequately serve the needs of roughly 700 thousand individuals who step over one another like puppies in a cardboard box trying to make their voices heard.

The main problem”and it’s enormous”is that while voting is voluntary, taxation is not. You may elect not to elect anyone, but you have no choice over the fact that you have to work four to five months every year merely to shovel coal inside the system’s insatiable mouth to keep it wheezing, belching, and chugging along. Despite the relentlessly propagated fiction that the government takes orders from me rather than vice-versa, I make no decisions in this process. Even worse, I am forced under threat of incarceration to pay whatever the fuck they tell me to pay. Therefore, I”m less than tickled about the idea that I”m awarded the “privilege” of having a roughly 50-50 chance in deciding who gets to decide things for me. I don”t quite deem it an honor being “allowed” to choose who gets to steal the fruits of my labor.