Election Eve 2008: A Bad Night to be White in Harlem 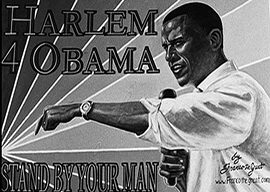 Two years ago, I was invited to an Election Eve party in Harlem. I found New York was vibrating with premature praise for our Savior. Centuries of cruel white hegemony would crumble beneath the “post-racial president.” Wisely, no one predicted an end to anti-white racism. They didn’t even consider it.

The moment McCain conceded, our multiculti party exploded into cheers and clinking glasses. I was passed from hug to hug around the apartment”black arms, Cuban arms, feminist arms, gay arms.

Our hostess, a lovely black actress, burst into tears, repeating, “We actually did it.” As if to dispel any doubt as to who “we” were, she suddenly exclaimed, “This is the Black House now, muthafuckas! Yeaaah!”

Total chaos erupted on the street outside. Victory cries, car horns, banging metal trashcans, and the occasional celebratory gunshot shook the windows. I went outside to test the post-racial waters. I was immediately accosted by a group of sistas hooting down the sidewalk. They swarmed in on me, asking where I was from.

“Tennessee?!” one shrieked. “You people voted McCain! You lost, boy!” I wasn’t offended by their gloating”hell, I didn’t even vote”but now I was on the radar. Jubilant blacks flexed on their stoops, yelling, “We own this shit now!” and “We took that shit!” Stink-eye all around.

“It seems that racism in America goes both ways, but the bullets mostly fly in one direction.”

This guy suddenly stuck a camcorder in my face, asking, “How do you feel at this moment? How does this make you feel?” Like I was McCain’s campaign manager. Like I had lost. He badgered me for half a block, so I gave him an honest answer: “I hope the new president lives up to your expectations more than mine.”

I had paused for too long. Two kids, no older than fourteen, came up trying to sell me some coke. My incorrigible documentarian wanted more answers. My path was filling up with onlookers. That’s when this beefy, dark-skinned Dominican jumped in my face. “Fuck you! This is our shit now, our shit!” He punched the corner store’s graffiti-covered shutters, then did a rooster strut back and forth for the camera, glaring at me. More angry faces gathered around. I was an amoeba in the T-cell Saloon.

Time to kick rocks. After all, this block wasn’t my shit to defend.

One might ask, why would a white guy get singled out in Harlem? It’s a tough question, but I’ll take a crack at it. How about: Because a lot of nonwhites are racists, too.

They have good reason to be. People survive by sticking together, and the more fervently exclusive the group identification, the more hostile people behave toward the rival Other. Us versus Them, and all of that.