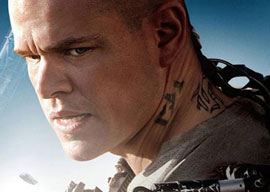 The new movie Elysium, another science-fiction fable from young Boer refugee Neill Blomkamp about the horrors of mass immigration and nonwhite overpopulation, isn’t terribly amusing to watch. But at the meta level, the career of Blomkamp, whose mother dragged the family off from Johannesburg to Vancouver after a 17-year-old friend was shot dead by black carjackers, is one of the funnier pranks played on the American culturati’s hive mind in recent decades.

I’ve read over a hundred reviews of Blomkamp’s two movies, and virtually no critic has noticed that he does not share their worldview.

Blomkamp’s 2009 Best Picture-nominated District 9, in which the black residents of his native Johannesburg demand that their black-run government clear out millions of feckless illegal space aliens, was universally praised by American critics as an apartheid allegory. Yet Blomkamp has relentlessly insisted in interviews that it’s really about “the collapse of Zimbabwe and the flood of illegal immigrants into South Africa, and then how you have impoverished black South Africans in conflict with the immigrants.”

Similarly, Elysium is another Malthusian tale about open borders, set in a dystopian 2154. By then, Los Angeles has been completely overrun by Mexicans, who have turned it into an endless, dusty slum that looks remarkably like urban Mexico today. (Blomkamp filmed for four months in Mexico City.)

The auteur explains that he is:

The rich, continuing to get richer from the collapse of the borders, have decamped for a gated community in the sky, recreating Beverly Hills in a delicate space station that rotates gently to produce gravity along its inner rim.

“The notion that art is about equality and niceness is just a cover story put out by artists to keep us poor schlumps from realizing what they are up to.”

Blomkamp, a gun-loving Afrikaner whose movies are based around his fear that the rapid breeding of Third Worlders threatens to bring down civilization, says Elysium originated in a disastrous visit to Mexico in 2005. While shooting a Nike commercial in lovely San Diego, the Boer crossed the border one evening to see Tijuana, where he was abducted by corrupt Mexican cops who shook him down for $900 in return for not killing him.

Despite the obviousness of Blomkamp’s parable about Mexican immigration’s catastrophic effects, Elysium has been universally interpreted as preaching the need for amnesty, open borders, and Obamacare.

For example, the most informative article on Elysium is a publicity piece in Wired, whose author still misses where Blomkamp is coming from. The director explains:

“The dice are going to be rolled, and either we’re going to end up coming out of this through technological innovation””leaps in genetic engineering, say, or artificial intelligence”“or we’re going to go down the road of a Malthusian catastrophe.”…He holds forth on just a few of the topics that engross him: overpopulation, pathogens, nukes; how America’s hegemony is slowly eroding en route to a “third world deathbed.”

If Blomkamp’s message is “socialist,” as various conservative sites have complained, it’s in the Afrikaner sense that the old apartheid state offered “Fascism for the blacks, capitalism for the English and Jews, and socialism for the Boers.”

In Elysium, Matt Damon plays Max, the last Anglo in LA. (The character’s name is presumably a tribute to Mel Gibson’s most famous role.) Gangsters recruit Max as the only man competent and motivated enough to infiltrate Elysium (which looks oddly like Damon’s mansions in Miami and Pacific Palisades) and take down its power structure.

The 42-year-old Damon, while appearing impressively ‘roided up, is dull in a role that Arnold Schwarzenegger would have knocked out of the park in the 1980s. Damon, a Howard Zinn fan, seems lost in a world he can’t begin to understand.

Elysium would have been more interesting with either of Blomkamp’s two earlier choices for the lead role, white rappers from black-ruled places: Detroit’s Eminem and Ninja of Die Antwoord, a satirical Afrikaner duo who are always on the verge of getting denounced as racist.