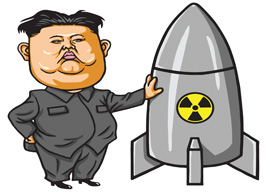 Writing about an international crisis a couple of days before publication risks making you look like a fool—okay, a bigger fool than usual. Politicians, of course, suffer likewise. In the first days of the Norway campaign in 1940, Neville Chamberlain said that Hitler had missed the bus. Well, it’s easy to get everything wrong. Less than a fortnight before Britain declared war on Germany in 1914, Prime Minister Herbert Henry Asquith, viewing the intensifying crisis, judged that, happily, the United Kingdom was unlikely to be involved. Neither Chamberlain nor Asquith was a fool; indeed both were men whose judgments were usually acute and sensible.

People talk of “the fog of war.” The fog of a developing international crisis is every bit as thick. I am just old enough to remember one of the last of the old London fogs when you couldn’t see a yard ahead and might try to make your way safely home by running your hand along the railings in the squares. Well, it’s a fog like that today. One would love to know just what is going on in President Trump’s mind.

“People talk of ‘the fog of war.’ The fog of a developing international crisis is every bit as thick.”

Nobody, one guesses, wants war now. This is at least a reassuring thought, which makes the current crisis very different from the mood in Europe in 1914 and 1939. It’s more like the Cuba crisis of 1962 when nuclear war seemed possible but was averted because neither Kennedy nor Khrushchev dared risk it. So each recognized that he had to make concessions.

There are different ways of approaching a crisis. President Teddy Roosevelt said you should speak softly and carry a big stick. President Trump has a mighty big stick in reserve, but some of his language has been anything but soft. This may be wise; it may be foolish. We don’t know.

When the great Duke of Wellington was asked to account for his success in war, he said he had trained himself when riding in unfamiliar country always to guess or estimate what lay on the other side of the hill. This is surely good advice. Wars often break out when people fail to read the minds of likely adversaries.

Some would have us believe that Kim Jong-un is a mad dog. Perhaps he is, though he seems quite rational to me. Still, whether he is mad or not, we should remember that dogs are most likely to bite when they are frightened. More important, we should recognize that the world as seen from Pyongyang looks very different from the world as seen from Washington, D.C. The U.S. ambassador to the United Nations, Nikki Haley, says that North Korea is “begging for war.” Really? Since it’s generally recognized that any war would leave North Korea in ruins, the fat young man who runs that benighted country must really be off his head if he is sitting up and begging for war; either that, or he has a suicide wish.

So it might be wiser to suppose he is rational, and afraid of the USA, than to assume that he has looked at what happened to Saddam Hussein and Colonel Gaddafi, and concluded that there would have been no invasion of Iraq if Saddam had demonstrated that he had nuclear weapons and that Gaddafi would not have been overthrown and killed if he hadn’t abandoned his nuclear program when he was invited to come in from the cold.

Some years ago my old friend, the historian Andrew Roberts, chided another old friend, the very distinguished journalist Sir Peregrine Worsthorne, for having apparently “forgotten the first principle of nuclear strategy, which is deterrence.” “The primary reason for retaining nuclear missiles is,” he wrote, “precisely so that we do not have to envisage any such thing as a murderous martial future.”