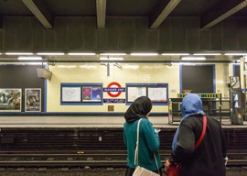 A hundred years ago, the sun never set on the British Empire. These days, England’s rulers are blowing out the candles and telling the citizens to enjoy the darkness.

Last week brought news of yet another sexual grooming scandal of underage girls perpetrated mostly by Muslims with roots in the Middle East upon poor and lower-class indigenous British girls. This follows similar scandals in the towns of Rotherham, Rochdale, Derby, Oxford, Bristol, Banbury, Aylesbury, and Keighley.

This time the scandal involves the West Midlands town of Telford. An 18-month investigation by The Mirror led reporters to describe the situation as Britain’s “worst ever” child grooming scandal:

Up to 1,000 children could have suffered in Britain’s worst known abuse scandal – where sex gangs targeted girls as young as 11.
The rape hell of vulnerable young girls in one town – Telford – went on for a shocking 40 years….
As many as 1,000 children could have suffered at the merciless hands of perverts and torturers in Telford since the 1980s.
Girls as young as 11 have been lured from their families to be drugged, beaten and raped in an epidemic that, say victims, is still ongoing.
THREE people were murdered and two others died in tragedies linked to the scandal.

Among the three murders is that of 16-year-old Lucy Lowe, who died along with her mother and sister after a 26-year-old taxi driver named Azhar Ali Mehmood set their house ablaze. Lucy had given birth to Mehmood’s child when she was only 14.

“A hundred years ago, the sun never set on the British Empire. These days, England’s rulers are blowing out the candles and telling the citizens to enjoy the darkness.”

The Mirror reported that as in the Rotherham case, authorities often either dragged their feet or didn’t investigate cases at all. They were extremely careful to hide the abusers’ Middle Eastern background “for fear of racism.” Although the age of consent in England is sixteen, many of the victims were as young as eleven—despite this fact, an internal police memo stated that “in most cases the sex is consensual.”

It’s unclear to what degree consent could have been a factor in the case of a twelve-year-old girl named Vicky Round, who was targeted by the Telford rape gang at age twelve when they forced her into a crack addiction. Two years later, she was a heroin addict. She died at 20 of a suspected overdose.

The Independent Inquiry Into Child Sex Exploitation in Rotherham found that the Rotherham gangs—which were overwhelmingly Pakistani—frequently targeted victims for being white. A Liberal Democrat named Lloyd Macdonald called the perps “profoundly racist” against white females. Two different abusers were quoted into the Rotherham report as follows:

White women are only good for people like me to use as trash.

All white girls are good for is sex and they are just slags.

Since the rapists (Middle Eastern) and victims (white English) skew similarly in Telford as they did in Rotherham and nearly all of the other grooming scandals, it wouldn’t be insane to assume that anti-white racial animus played a role in the Telford assaults as well. Throughout history, rape has been used as a psychological weapon by conquerors to emasculate the local male population, and what’s happening in England right now falls neatly into that pattern.

In 2016, authorities in Telford petitioned British Home Secretary Amber Rudd to launch a Rotherham-style investigation into the decades of child sex abuse in their town, but they received no response. It is thought, however, that Rudd played a role in preventing 22-year-old conservative YouTuber Laura Southern from entering the UK on March 12.

Southern’s crime was that during a previous trip to the English city of Luton, she’d distributed tongue-in-cheek “LGBT for Islam UK” fliers which were obviously meant to shine a spotlight on leftists’ willful blindness about how Islam routinely blasphemes some of KultMarx’s most sacred of sacred cows. Ignoring the fact that Islam is not a race, the UK Home Office accused Southern of “distribution of racist materials,” said she advocated “Christian extremism,” and concluded that her presence in England “is not conducive to the public good,” and insisted that if her pale-and-frail toes were to graze British soil even for a moment, it would represent “a threat to the fundamental interests of society and to the public policy of the United Kingdom.”

Southern was detained for a few days and then sent home. During her ordeal she tweeted:

I’m not kidding about this, but during my questioning by the UK police… I was asked about my Christianity and whether I’m a radical. I was also asked how I feel about running Muslims over with cars.