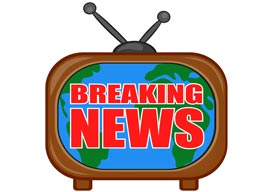 Yesterday, a massive brawl broke out at a St. Louis City Hall meeting that was called to investigate police behavior. A senator who works with the police unions stood up to defend the police and was quickly shouted down with: “You white supremacist motherfucker. Get the fuck out of here.” Then the entire place burst into a gigantic fight between blacks and whites.

I blame the media. They created this tension.

The media love hate crimes because they seem to explain everything that’s wrong with America and put the blame on someone who can handle it: white people. Unfortunately, there aren”t enough hate crimes against blacks to go around, and journalists are forced to invent them. What they don”t realize is that the biggest hate crime hoax is the press itself.

By creating an imaginary reality where blacks are constantly under siege, they are all but daring them to attack and murder whites. The media have created the racial tension they were going for, only they got everything backwards. In an attempt to create a fictional world where whites hate blacks, they accidentally created a real one where blacks hate whites.

Last week, Fredrick Young was sentenced to life in prison for the torture and murder of two white teenagers, Jourdan Bobbish and Jacob Kudla. After yawning throughout the trial, he turned to the victims” families and said: “I”d like to say sorry to the families of Aiyanna Jones, Michael Brown, [and] Eric Garner … for not being able to get justice for their loved ones who was murdered in cold blood.”

“Young blacks committing this kind of senseless violence is a real pattern. Cops and vigilantes shooting innocent kids is not.”

He punctuated this hair-whitening audacity by putting his hands in the air and repeating the wildly popular hashtag, “Black Lives Matter.”

One of the boys” mothers said she will pray for forgiveness. Good luck with that, God.

But this case doesn”t get the media going the way certain others do, because it doesn”t fit their narrative: that cops and vigilantes are going out left and right to mow blacks down. This is a dangerous lie to tell because it encourages revenge killings. These murders are pointless hate crimes.

Fatal NYPD shootings have in fact been dropping for decades, but a black Muslim named Ismaaiyl Brinsley ate up the anti-American media narrative and decided to assassinate two NYPD cops. His logic went, as he put it, “They take 1 of ours. Let’s take 2 of theirs.”

This story was so explosive it had to make the news, but few know of Zemir Begic, who was bludgeoned to death with hammers for being white and outside, while trying to prevent his street from being looted. Begic looks as caucasian as every Gino on the Jersey Shore, but he’s originally from Bosnia, so the cops referred to him as an immigrant and refused to call the attack a hate crime against whites.

Last August, Iraq war vet Ralph Weems was beaten to within an inch of his life because he’s the same race as the cop who shot Mike Brown. The black mob who followed him from one restaurant to another to carry out the attack showed no mercy and kicked him repeatedly in the head after he was down.

The Department of Justice is reluctant to call this a hate crime even though the attack was prefaced with Weems being told that the area he was in was “not safe for white people” because of what happened to Mike Brown. Weems is still suffering from traumatic brain injuries. As his father recently put it, “He’s not coming home anytime soon.”

There were dozens of attacks like this recently and the media have tamped them all down. Remember the black gunman in St. Louis who was targeting elderly couples and telling them, “This is for Michael Brown”? Me neither.

All these attacks bear a striking resemblance to the ones we saw after Trayvon Martin was killed”and the new cases keep changing the context of the old ones. The more this happens, the less the brutal beating of Matthew Owens looks like a freak occurrence.

There were dozens of attacks in the name of Trayvon, and outside of the actual perps, the media also have to take some blame. It was NBC who lied and said Zimmerman told 911, “He looks like he’s up to no good, he looks black.” This fake story didn”t just ruin Zimmerman’s life, it created racial tension in this country that will last for decades.

In the pretend America they constructed, cops and white vigilantes randomly shoot black kids because they”re bored. In the real America, as Taleeb Starkes points out, Christopher Lane and Pat Mahaney are two white guys who were attacked (Lane was killed) by bored black teenagers. Where’s the parade? Why were Channon Christian and Christopher Newsom kidnapped, sodomized, tortured, and lit on fire?

Young blacks committing this kind of senseless violence is a real pattern. Cops and vigilantes shooting innocent kids is not.

The common refrain used to deny this reality is that the above cases involve criminals who get arrested, while killer cops avoid prosecution because of “institutionalized racism.” But in truth, cops are under so much scrutiny from the race baiters that one study found they are more hesitant to pull the trigger on armed black suspects than on whites. The “racist” stop & frisk program actually wound up stopping a disproportionately high number of whites.