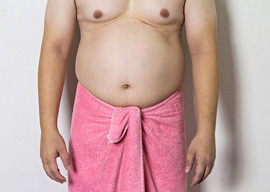 Until last month, I lived in blissful ignorance of the existence of Mr. Manboobs. Ah, those were good days. But now that I”ve had the misfortune to become acquainted with him, I shall similarly curse you with the knowledge of his existence. Yes, there is a “Mr. Manboobs.” His name is Matt Cornell, and he was born with a condition called gynecomastia. What exactly is gynecomastia? It’s an always-fatal malady on par with muscular dystrophy and ALS. Just kidding! It’s a very common and completely nonfatal endocrine-system disorder, present in about 70 percent of adolescent boys, in which there is a slight increase in the size of male breast tissue (usually during puberty).

In other words, manboobs (or “moobs,” to use the recommended term from the AP Stylebook).

To you, that might sound like a “not the end of the world” kind of thing, but to Matt Cornell, it’s a condition that puts him on par with Ryan White and the asshole dying kid who put all that unwarranted pressure on Babe Ruth. Cornell is a “progressive” activist who walks the earth using his manboobs to teach lessons about social justice and feminism. If Matt Cornell didn”t exist, Trey Parker and Matt Stone would have to invent him. Cornell has been featured in The Guardian, on Jezebel, and on Mic, among other media outlets, and he’s a writer for the Good Men Project, a nonprofit that encourages men to embrace “enlightened masculinity” (making a joke about “enlightened masculinity” and men with breasts would be too easy, so I”ll skip it).

Now, as I said, I”d never heard of this guy until last month, when he trolled me on Twitter. It was actually a fairly common type of troll aktion, one I get every few months or so. A guy direct-messages me, asking some sincere-sounding question about the Holocaust, and I answer in good faith, primarily because I feel it’s my responsibility to engage anyone seeking knowledge about the thing I”ve devoted so many years to studying. After receiving my reply, the troll takes to Twitter to giggle like a moron about “OMG, I just had a correspondence with the NAZI JEW DENIER David Cole! What a monster!”

Following the troll script, Cornell contacted me on Twitter with a sincere-sounding question about my views on Nazi gas chambers. I told him I”d love to address his question, but I”d rather do so via email rather than Twitter, because, frankly, I can”t stand the 140-character limit, and, not being a 17-year-old girl, I”m no good at Twitter slang and abbreviations. So I gave him my email address and invited him to contact me there. Inadvertently, I had provided the punchline to his aktion, as he immediately returned to Twitter to broadcast my email address to all of his followers. Ha-ha! You got me, Mr. Manboobs!

Since I don”t usually get trolled by people who”ve written for The Guardian, I decided to examine Cornell’s work. What’s the connection between his moobs and social justice? In a piece that ran on about a half-dozen sites (including The Guardian‘s), Cornell summed up the reason for his crusade:

I once scandalized a fancy pool party simply by taking off my shirt. I realize that, as a man, it is my privilege to do so. In most parts of our society, it is either illegal or strongly frowned upon for a woman to go topless. (Female breasts are either for maternity or for male sexual pleasure, not for baring at polite parties.) Perhaps my breasts, which remind people of this prohibition, invite a similar kind of censure.

Naturally, that doesn”t make a lick of sense. In fact, it’s so scatterbrained it’s almost impossible to paraphrase. He seems to be saying that society dislikes his manboobs because they remind people of female breasts, so being in the presence of moobs provokes a negative reaction because female breasts are prohibited publicly but enjoyed by men sexually but the men who love female breasts have a negative reaction to him because his moobs remind them of the public prohibition of female breasts, a prohibition they favor but don”t like to be reminded of because…um…uh…okay, you lost me. Putting aside the fact that in “our society,” female breasts are on public display pretty much all over the place, and that at “polite parties,” men usually don”t go topless either, what we have is a self-conscious dude who thinks people are staring at his moobs, and, with zero actual evidence to back it up, he’s constructed a bizarre and nonsensical theory that the supposed staring somehow proves “misogyny,” even though he’s a dude.

It’s not my desire to ascribe undue importance to a guy who defines himself by his man-tits, but I think Cornell’s mania provides an interesting illustration of a much larger issue. In his various writings, we see an example of a plague that is widespread among (though certainly not unique to) leftist social justice warriors: confirmation bias. SJWs love to “discover” new examples of racism, sexism, homophobia, Islamophobia, and all the other isms and “ophobias” they claim plague America. An SJW will enter a given situation with metaphysical certitude that this-or-that ism or ophobia is present, and the SJW will interpret whatever transpires in that situation in a way that confirms the SJW’s predetermined conclusion. This often necessitates wild flights of fancy and unfounded assumptions about the motivations of others.

I”ll give you an example.

SJW gets all sweaty from a 12-mile run. SJW goes to Starbucks. Random stranger, making conversation, says, “Been working out, huh?” SJW, knowing (with pseudo-certainty) that sexism was behind the comment, interprets the idle chatter to mean that “women shouldn”t be allowed to sweat.” SJW feels victimized. SJW writes an “exposÃ©” about her sexism “discovery” (the one that was entirely in her head). SJW gets published in one of the world’s leading newspapers. Yes, that’s a real example. And one of many.

SJWs have discovered that breakfast is racist and dinner is sexist (I suppose that means lunch must be homophobic). The SJW is oblivious to his/her/its role in creating the “discovery.” SJWs believe that their interpretation is objective reality, that the map is the terrain. This is an essential element in the process, because it’s exactly that pigheaded certainty that allows SJWs to be so self-righteous.