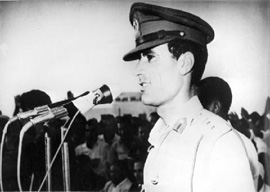 Does anyone remember Joe Orton? The people maintaining that website clearly do, though mainly it seems as a “gay icon,” a thing Orton would have hated. He was actually a British playwright briefly famous in the mid-1960s. He died in August 1967 at the hands of his lover Kenneth Halliwell in a murder-suicide.

Orton’s plays were considered transgressive at the time, and I recall being much amused by them in my college days. To judge from the few clips I could find on YouTube, they have not aged well. They seem not to be staged much anymore. Entertaining Mr. Sloane had a ten-week run at an off-Broadway theater in 2006. Loot seems not to have been produced anywhere of consequence since 1986. So fleeting is glory!

In 1978 John Lahr wrote a biography of Orton with the memorable title Prick Up Your Ears. It includes an account of a farcical trip to Libya taken by Orton and Halliwell in March 1967, five months before the murder-suicide. This is the only appearance of Libya in any work of literature known to me, and as you’d expect from a bookish type, it’s what always comes to mind first on a word-association test with “Libya.”

“He has now been in power a remarkable 42 years and counting.”

The trip was an utter disaster. The hotels were all full, so Orton and Halliwell ended up sleeping in a tiny cabin on a ship moored at Tripoli. Being deeply unsuccessful himself, Halliwell was already half-demented by Orton’s success as a playwright. Orton recorded the fiasco in his diary:

“Oh, my God!” Kenneth said, rounding upon me savagely. “Look what a mess you’ve got us into now! Dumped on a ship in the middle of some wretched fascist state! I’m going to faint!” I found myself saying, “Pull yourself together! There’s no need to behave badly.” “I warned you what it would be like. No travel agency does Libya. And I’m not surprised,” Kenneth said….

On board the evening was just beginning….A few middle-class Libyans were strolling about. “Wog bourgeoisie is even worse than the home product,” I said, rather wishing Kenneth was in a better mood to appreciate the remark. “Shut up!” Kenneth said….

Libya was at that time under the rule of the doddering but pro-Western King Idris, whose portrait I have been surprised to see on display in some of the recent news footage from rebel territory.

Idris was nothing so modern as a fascist. His country only got its first secondary school in 1935, when he was already middle-aged. Idris was a sensible reactionary willing to let national affairs be settled by consensus among tribal chiefs. Unfortunately he had no clue how to cope with the oil money flowing into his treasury by the mid-1960s. Neither did he grasp the temptation that money presented to ruthless power-challengers, nor the degree to which it relieved Libyans of the need to work for a living.